What is Dong Quai?

If you’ve ever heard of “female ginseng”, then you’ve heard of dong quai, which has the scientific name Angelica Sinensis. This powerful herb grows primarily in Asia and has been in use for thousands of years as a sacred herbal remedy. While many traditional Chinese herbal medicines are largely discounted by medical professionals, dong quai remains quite viable and continues to prove its value as more and more medicinal benefits are identified. The yellow root of the dong quai plant is where the most valuable chemical components are found. This root is then dried and used to make a number of powders, tinctures, tonics, and other herbal supplements, notably for female health issues, but more recently for an impressive array of benefits. The plant actually belongs to a rather normal family, Apiaceae, which is commonly known as the carrot, parsley, and celery family, but the unique chemical composition of dong quai gives it far more benefits than your average green stalk. [1]

The nickname “female ginseng” may turn off some men to using dong quai, but as it turns out there, are plenty of benefits for both genders. The active ingredients like ferulic acid, coumarin, various polysaccharides, and more than 70 other powerful chemical compounds result in significant effects on our system, and it’s becoming harder to deny! [2] 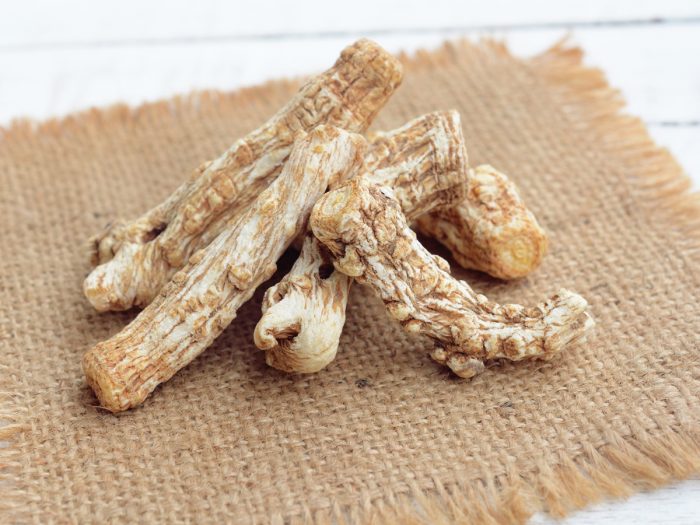 Let’s take a closer look at this mysterious and powerful plant to investigate the many health benefits of this root.

For thousands of years, dong quai has mainly been turned to by women, as it has a unique ability to regulate estrogen levels within the body. Whether you’re too high or too low in the estrogen department, dong quai extracts and supplements can get your system back on track, effectively helping to regulate periods. [3]

Acts as an Aphrodisiac

Studies have shown that dong quai in various forms can increase male and female libido levels, as well as their fertility likelihood. Instead of going to expensive fertility centers and paying thousands of dollars or spending years trying to conceive, adding some powerful dong quai to your diet can help boost your chances of conception, and increase your interest in the act itself! [4]

Dong quai has beneficial effects on the symptoms of premenstrual syndrome and menopause. The cramping, mood swings, and general discomfort of menstruation are alleviated by the antispasmodic properties of dong quai. It also helps to replenish the blood after your menstruation so that you don’t feel weak or tired for days afterward. For women who have chosen to get off birth control pills, it can actually help to naturally regulate and ease your cycle. However, it is important to note that it is not good, rather it is harmful to take dong quai while on periods. [5] [6]

Traditionally it has also been used by men suffering from premature ejaculation problems to prolong intercourse.

Dong quai helps generate more blood cells in the body, thus, acting as a blood tonic. The rich source of folic acid, biotin, vitamin B12, and nicotinic acid, makes it a key ingredient in the majority of Chinese blood-boosting formulas. It acts as a blood purifier and thinner, which helps prevent blood clots.

Dong quai, due to its invigorating and arousing properties, has been linked with reducing depression and lessening the effects on our system. There is a relationship between dopamine and serotonin releases in our body from certain active components of dong quai, which can explain this wonderfully uplifting quality of this supplement! [7]

The high levels of nutrients and vitamins in dong quai, such as folic acid, biotin, and vitamin B12, work to clear out the blood and reduce toxicity throughout the body. [8]

Iron is a key component of red blood cells, and without it, people often suffer from anemia, characterized by headaches, muscle weakness, unexplained fatigue, and cognitive disorders. Dong quai is a powerful natural remedy for anemia. [9]

Dong quai has the ability to improve mood and lessen anxiety, depression, and stress. For women undergoing the hormonal rollercoaster of menopause or menstruation, as well as men suffering from anxiety, stress, and depression, it can help to regulate hormones to reduce mood swings and ease our minds. [10]

Dong quai is chock full of powerful chemical compounds that have a wide range of effects on our body, including eliminating free radicals before they can damage our organ systems and cause chronic diseases. This means that it has the potential to reduce our chances of everything from heart disease to cancer due to these important antioxidant compounds. [11]

Dong quai can help with heart health in a number of ways. Firstly, it has been directly connected with lowered blood pressure in research studies, and it can also treat abnormal heart rhythms due to its antispasmodic capabilities. Finally, this root can reduce excess platelet build-up in the arteries and blood vessels, which is one of the main causes of atherosclerosis, strokes, and heart attacks. [12]

Dong quai works as an anti-inflammatory and antibacterial substance for skin conditions like alopecia, psoriasis, and eczema, lessening the discomfort and appearance of these skin afflictions quickly. The antioxidant compounds present in the herb keep the skin young and healthy in appearance. [13]

Dong quai helps in increasing bone density in men and women. It helps prevent osteoporosis by strengthening the bones, which is an obvious symptom in women after menopause. [14]

Dong quai helps to reduce several inflammatory markers in the body, which is the body’s reaction to fight off foreign organisms. The rich source of antioxidants present in it makes it an extremely effective anti-bacterial and anti-inflammatory food. [17]

This potent herb has the ability to regulate estrogen levels – whether they are exorbitantly high or too low. Moreover, it helps in strengthening the uterus, improving uterine tone, and regulates the menstrual cycle. [18]

Female ginseng is also a blood tonic in Traditional Chinese Medicine that has been utilized to improve red blood cell counts that help after menstruation. It also increases blood flow to the reproductive system, reducing congestion and excess pain. It is traditionally used for situations of stagnation such as PCOS, endometriosis, ovarian cysts, and uterine fibroids.

While studies have confirmed the various benefits of dong quai, anecdotal evidence shows that it does have side effects such as:

If you experience any of these symptoms, discontinue its use and consult your doctor immediately.

Rate this article
Average rating 4.0 out of 5.0 based on 326 user(s).
Read This Next:
Popular Articles