The health benefits of cauliflower include a reduced risk of cancer, heart and brain disorders, relief from indigestion, detoxification of the body, increased iron absorption, and weight loss. This superfood also helps boost eye health, maintain hormonal balance, and prevents diabetes, colitis, respiratory papillomatosis, hypertension, and the harmful effects of ultraviolet radiation. It is packed with nutrients and antioxidant power which helps in strengthening the immune system, maintaining bone and cellular health, electrolyte balance, and optimum cholesterol levels.

Cauliflower is a cruciferous vegetable that belongs to the Brassicaceae family, which includes broccoli, kale, and cabbage. It derives its name from the Latin word ‘caulis‘ which means cabbage with a flower. The florets on the head of the cauliflower, also known as curd, are tightly clustered and consist of immature flower buds attached to a central stalk. To protect the flavor and softness of the cauliflower heads, they are kept away from sunlight to prevent the development of chlorophyll pigment and over-maturity.

It is considered to be ancient Asia but it re-emerged in the Mediterranean region, Turkey, and Italy in 600 BC. Around the mid-16th century, this vegetable achieved recognition in France and Northern Europe. Today, India, China, Italy, France, and the United States are among the top producers of cauliflower throughout the world.

7 Reasons Why You Should Eat Cauliflower | Organic Facts

Cauliflower is a rich source of vitamin C, folate, vitamin K, B complex vitamins and vitamin E. It provides vital minerals such as calcium, magnesium, phosphorus, potassium, zinc, sodium and iron without adding any harmful cholesterol. It is a good source of protein, a substantial amount of phytochemicals, unsaturated fats, and essential omega-3 fatty acids. It also provides dietary fiber and contains smaller amounts of natural sugars as compared to the other members of its botanical relatives, such as broccoli.

Carbs and Calories in Cauliflower

The carbs and calories in cauliflower are mentioned below.

Cauliflower is available in four major groups: Asian, Italian, northwest European biennial, and northern European annuals, represented by more than a hundred varieties. Apart from white, it also comes in several other colors mentioned below.

Let us look at some of the important health benefits of cauliflower in detail:

Cauliflower contains vitamin C, manganese, and other potent antioxidants that help in imparting nourishment to the body. It also contains phytochemicals, called indoles and glucosinates, namely glucobrassicin, glucoraphanin, and gluconasturtiin. These components stimulate cancer-blocking enzymes and protect the body cells from the oxidative stress and damage caused by free radicals.

Regular consumption of cauliflower ensures blood circulation and helps in maintaining proper functioning of the blood vessels, which can be attributed to the presence of glucoraphanin and vitamin K. Glucoraphanin is converted into isothiocyanates that activate anti-inflammatory activities and prevent the accumulation of lipids in the blood vessels. This aids in the unobstructed flow of blood, which reduces the risk of conditions like atherosclerosis and promotes cardiovascular health. Research has also proved that the antithrombotic and antiplatelet function of Indole-3-carbinol, found in abundance in cauliflower, contributes significantly towards a healthy heart. 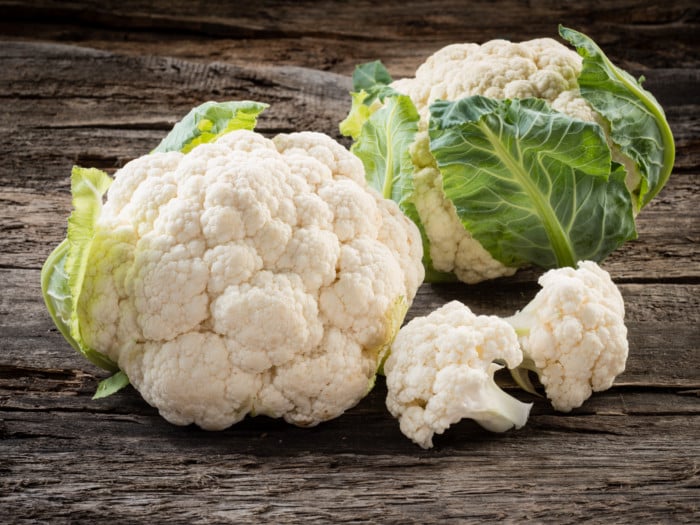 Studies have shown that indole-3-carbinol present in cauliflower has chemopreventive and anti-estrogen effects that help in hampering the growth of uterine cancer cells.

Research published in The Journal of Nutrition has provided supporting evidence for the fact that consumption of brassica vegetables such as cauliflower helps in suppressing cell proliferation, especially in terms of breast cancer.

Cauliflower is a source of dietary fiber that aids in digestion and promotes the elimination of toxins from the body. The presence of glucosinolate, glucoraphanin, and sulforaphane in this vegetable protects the stomach lining and helps in resisting the growth of Heliobacter pylori bacteria. In addition to this defense mechanism, dietary isothiocyanates in cauliflower prevent the risk of various abdominal disorders such as stomach ulcers and colon cancer.

Vitamin C present in cauliflower helps to better absorb iron in the blood. This helps to increase the hemoglobin count in the body.

Slows the Progression of Respiratory Problems

Cauliflower contains vitamin C, which plays an important role in the production of collagen that protects the joints and bones from inflammatory damage. Also, it contains vitamin K, which may help in preventing bone loss in both men and women.

It is rich in vitamin C and antioxidants and thus, is effective in reducing the risk of age-related macular degeneration which can lead to blindness, particularly in the elderly. The sulforaphane protects the retinal tissues from damage caused by oxidative stress, prevents vision impairment, and various eye ailments such as cataracts.

Cauliflower contains indole-3-carbinol, a phytonutrient that, along with sulforaphane, helps in activating and regulating the function of detoxifying enzymes.

Studies have shown that sulforaphane present in cauliflower is effective in protecting the skin against the damage caused by ultraviolet radiation. The protective action of sulforaphane defends the body against inflammations, skin cancer, UV-induced erythema, and cellular damage.

Cauliflower, along with healthy skin, also promotes hair growth due to the presence of sulfur and silicon.

Reduces the Risk of Nervous Disorders

The sulforaphane present in cauliflower plays a key role in reducing the progression of neurodegenerative diseases. According to a 2018 study by Lee S et al., consuming it has the potential to decrease the accumulation of amyloid-beta and tau proteins in the brains of Alzheimer’s patients.

The antioxidant and anti-inflammatory properties of the glucoraphanin and sulforaphane present in cauliflower help in reducing oxidative stress, along with the levels of LDL (bad) cholesterol. It also promotes the stimulation of HDL (good) cholesterol and lowers blood pressure. In addition to this, the fiber and omega-3 fatty acids present in cauliflower also prevent hardening of the arteries.

The potassium content in cauliflower helps in maintaining the electrolyte balance in the body, which is essential for the functioning of the nervous system in the transmission of nerve impulses and muscle contractions.

Cauliflower is rich in antioxidants and immune-strengthening nutrients. Along with other healthy components, the presence of vitamin C in it inhibits various infections and strengthens the defense mechanisms of the body by hampering the growth of disease-causing inflammation.

Cauliflower contains indoles, which possess anti-obesity effects. Studies have supported the fact that consumption of cauliflower is beneficial in preventing various inflammatory and metabolic disorders in the body. It also helps in the stimulation of fat-burning thermogenesis, aids in weight loss and prevents obesity.

The inclusion of cauliflower in your diet is beneficial during pregnancy due to the presence of essential folate, which helps in the healthy neural development of the baby.

Cauliflower contains choline and phosphorous, which are both effective in repairing cell membranes. This is essential for the efficient functioning of the brain and nervous system for transmitting nerve signals. In addition to this, the presence of potassium and vitamin B6 in cauliflower plays an important role in maintaining brain health and promoting proper communication in the nerves.

According to the American Diabetes Association, it is healthy to eat half of one’s plate or at least 3-5 servings of non-starchy vegetables daily. One serving is equivalent to 1/2 cup cooked or 1 cup raw. Non-starchy cruciferous vegetables include brocolli, cauliflower, kale, and cabbage.

Studies have suggested that extracts from cauliflower exert anti-inflammatory effects on the symptoms of ulcerative colitis. This protective effect can be attributed to the presence of phenethyl isothiocyanate, which exerts a healing effect on the damage occurred in colon tissues and the colon epithelium.

The consumption of white flesh fruits and vegetables such as cauliflower helps in reducing the risk of stroke, due to the presence of compound- allicin, which also aids in the cleansing of the liver and the blood.

How To Select And Store A Cauliflower?

Cauliflower with clean, tightly bundled, creamy white florets with bright green leaves are the best ones to pick. Yellow, spotted florets with saggy leaves are the ones devoid of nutrition and freshness. Dark-colored patches on it may also indicate the presence of a disease known as downy mildew.

This vegetable can be stored in the refrigerator for 5 days. Cut florets needs to be consumed within 4 days as it doesn’t last long.

Cauliflower is a versatile vegetable that has become a favorite in health circles. Here are different ways to serve it:

Cauliflower can cause side effects such as allergies, kidney stones, and excess gas. Avoid excess intake and also avoid its use if taking medications such as warfarin and coumadin.

Gas: Cauliflower contains complex carbohydrates that do not get broken down entirely in the digestive tract. These carbohydrates are then fed upon by the intestinal bacteria. This can sometimes result in bloating and the release of odorous gases such as hydrogen and carbon dioxide.

Uric acid: Cauliflower contains purines which can cause various health concerns if consumed in excess. Purines break down to form uric acid and the excessive intake of purine-rich foods can lead to a build-up of uric acid in the body. This can further pave the way for uric acid-related problems such as kidney stones and gout.

Anaphylaxis: Cauliflower may prompt anaphylaxis in some people, which means it can cause a severe bodily allergic reaction to a substance. Warning signs of such allergic reactions include swelling of certain body parts, itching, dyspnea, and breathing complications. It is always advisable to discontinue the intake of cauliflower in the occurrence of such critical symptoms and seek medical attention immediately.

Warfarin: Cauliflower is rich in vitamin K, which is utilized by the body for normal blood clotting. It can interact and reduce the effectiveness of anticoagulants like warfarin and coumadin which are prescribed to prevent the clotting of blood in the body. If you are taking anticoagulant drugs, it is always advisable to discuss with a health professional.

Cauliflower is a versatile vegetable that brings a pleasant flavor along with low-calorie nutrition to the diet. The inclusion of cruciferous vegetables such as cauliflower in the diet would go a long way in providing ample benefits for almost any lifestyle!