Mushrooms are known for their nutritive value as they are potentially a good source of antioxidants, selenium, vitamins like vitamin B, and fiber. They are included in several weight management plans due to their low content of carbohydrates and calories. Mushrooms may also help reduce the risk of metabolic diseases, aid in weight loss, and improve cognitive health.

They take center stage in fairy-tales such as Alice in Wonderland; they are even featured in video games such as Super Mario Brothers where they make someone bigger in size or act as a shield against dangerous monsters. These aren’t just popular culture references, they are symbolic representations of the actual health benefits of mushrooms. Let us look at them in detail. [1] 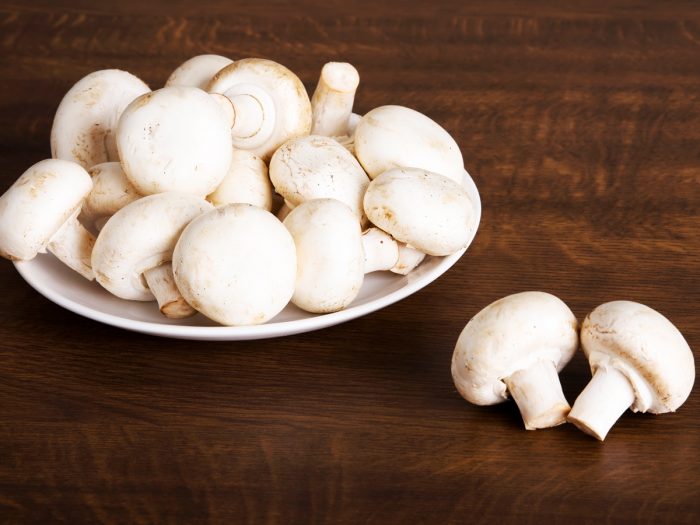 There are approximately 140,000 species of mushroom-forming fungi in the world. However, scientists are only familiar with about 10 percent, and only 100 species or so are being studied for their potential health benefits and medicinal applications. According to the Mushroom Council, popular edible mushrooms include: [2] [3]

Mushrooms are favored in weight loss diets as they are low-calorie and low-carb food. A cup of raw, white button mushrooms contains just 15.4 calories and 2 grams of carbohydrates. , They are also a good source of vitamins and minerals including vitamin C, B-vitamins (niacin, riboflavin, thiamin, folate), vitamin D, selenium, potassium, phosphorus, magnesium, and sodium. [5]

May Be Rich In Antioxidants

Mushrooms may have significant antioxidant properties due to their bioactive compounds, such as polyphenols, polysaccharides, vitamins, carotenoids, and minerals. A 2017 Penn State study suggested that mushrooms have an unusually high amount of two important antioxidants, ergothioneine and glutathione. [6] [7] [8]

Antioxidants can help rid the body of toxic free radicals and bring down oxidative stress levels, thus reducing the risk of neurodegenerative diseases. Researchers found that the amounts of ergothioneine and glutathione in mushrooms vary by species. Porcini, a wild variety, contains the highest amount of the two compounds among the 13 species tested by the researchers.

Also, mushrooms are one of the richest plant-sources of selenium, a vital antioxidant, but the content depends on the soil in which they are cultivated. [9]

Many varieties of mushroom like portobello have a meaty taste, making them a favored choice with vegetarians and vegans. Their low-calorie, low-carb content may also make them a preferred choice among people who are following the ketogenic diet or the paleo diet. A review published in 2008 studied the impact of substituting mushrooms for higher calorie food, beef, in a 4-day diet intervention for overweight or obese adults. While the volume of food was similar, the energy content of meat and mushroom lunches varied (783 calories versus 339 calories). While there were no differences in ratings of hunger, satiety, or palatability between the mushroom and meat weeks, the average daily calories and fat were lower with the mushroom meals. [10]

Researchers analyzed data from 663 people aged 60 and above from the Diet and Healthy Aging study in Singapore and found that people who ate mushrooms more than twice a week had reduced odds of having mild cognitive impairment. Also, an animal model study revealed that a bio compound in mushrooms called ergocalciferol may help protect the brain from beta-amyloid peptide toxicity. This may help in reducing the risk of Alzheimer’s disease. However, more detailed studies on humans are required to understand its therapeutic potential. [11] [12] 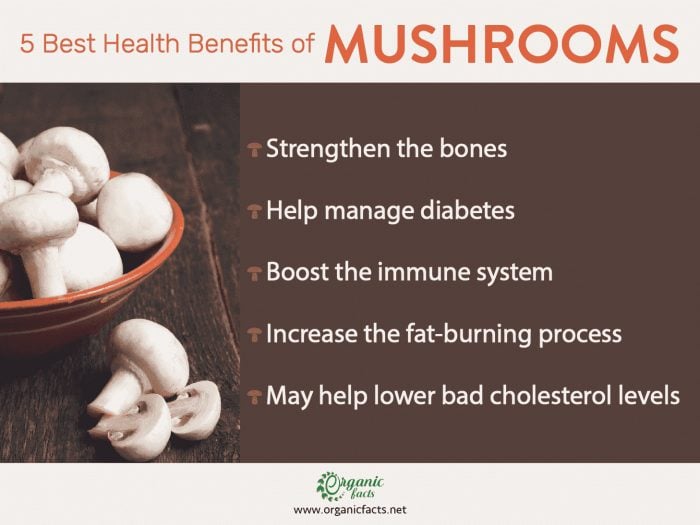 Other Potential Benefits of Mushrooms:

Rate this article
Average rating 3.9 out of 5.0 based on 909 user(s).
Read This Next:
Popular Articles