In the book “Plant-Based Sports Nutrition: Expert Fueling Strategies for Training, Recovery, and Performance“, authors and registered dieticians, Matt Ruscigno and Enette Larson-Meyer, say that there is mounting evidence that polyphenols in fruits, vegetables, and teas play an important role in reducing inflammation. Several studies are being conducted to find out the efficacy of natural muscle relaxers that can be used as a complementary medicine and have minimal side effects on the human body.  [1] [2] [3]

Let us look at the list of top science-backed natural muscle relaxers.

Saffron (Crocus sativus Linnaeus) is an ancient herb valued for its distinctive natural dye and floral fragrance in the culinary world. While saffron was used in traditional Iranian medicine for many years, the herb is now being researched for its anti-inflammatory properties. A 2015 study, published in the Clinical Journal of Sport Medicine, showed that oral supplementation of a saffron capsule (300 mg/day) 7 days before and 3 days after eccentric exercise helped prevent muscle soreness in healthy male university students. Also, an animal study showed that the flavonoids, tannins, and anthocyanins present in saffron have antinociceptive effects against chemical pain. The different forms in which you can use saffron as a muscle relaxer is through oral supplements, application of saffron oil, or having saffron tea. Pregnant women should avoid it because of its uterine stimulation ability. [4] [5] [6] 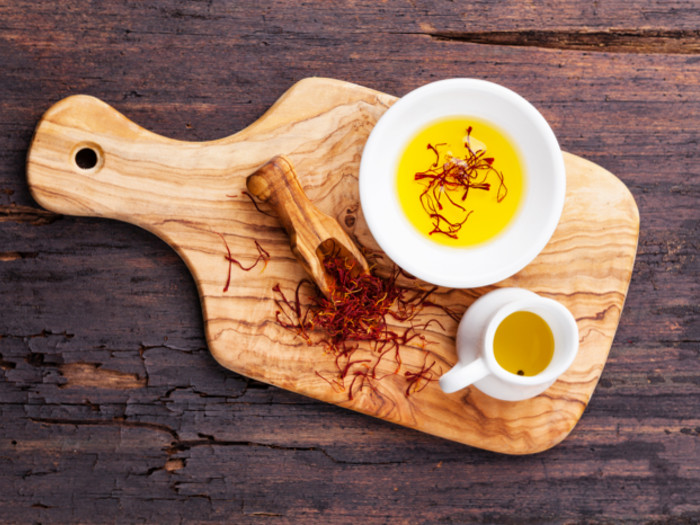 Saffron oil is extracted from saffron spice and is known to have a wide range of benefits for your hair, skin and overall health. Photo Credit: Shutterstock

Researchers have found that curcumin, a naturally occurring yellow pigment in turmeric, can be used as a natural alternative to nonsteroidal drugs such as aspirin, ibuprofen, and naproxen for the treatment of inflammation. The recommended dosage is 400–600 mg taken three times per day, according to a study in the Surgical Neurology International. Side effects are few; however, a high dosage can cause gastric ulcers. Alternatively, you can use turmeric in combination with lower doses of nonsteroidal medications. Try sipping on a relaxing cup of turmeric tea or golden milk to lessen muscle spasms.  [7]

Daily consumption of raw ginger and heat-treated ginger supplementation helps in moderate to large reductions in muscle soreness, according to a report published in the Journal of Pain. Researchers concluded that ginger has a hypoalgesic effect on people suffering from osteoarthritis pain. Furthermore, it can also help lessen the progression of muscle pain. You can use ginger root supplements, dried ginger powder, pain-relieving gels containing ginger, or benefit from ginger oil aromatherapy. Turmeric ginger tea is a natural muscle relaxer, which can be easily made at home. [9] [10]

Sri Lankan cinnamon ranks high as a powerful anti-inflammatory agent in a list of 115 foods tested, according to a study. Cinnamic aldehyde, the chemical compound which gives cinnamon its characteristic flavor and fragrance, inhibits the biomarkers related to inflammation.  [11] [12]A study published in the International Journal of Preventive Medicine revealed that cinnamon and ginger, when administered to female athletes, helped decrease muscle soreness. Although cinnamon is available in capsule form (1000 mg), intake of cinnamon water or cinnamon tea can also help relieve muscle spasms and enhance mood. Consider using cinnamon essential oil for aromatherapy to relieve tension in the muscles. [13] [14]

Black tea has been used in traditional Chinese medicine for its ability to warm the muscles. Also, theaflavins, which are antioxidants polyphenols found in black tea extract, are known to have anti-inflammatory properties. Data from a randomized, double-blind, crossover study showed that consuming theaflavin-enriched black tea extract helped participants improve their recovery after bouts of high-intensity anaerobic exercise. While black tea extract pills are available, you can also use black tea tincture and have traditional black tea without milk and sugar to reduce delayed-onset muscle soreness (DOMS).  [15] [16] [17]

Pomegranate juice, a natural muscle relaxer popular among athletes, contains anthocyanins, flavonoids, and ellagic acid that are responsible for its anti-inflammatory properties. A 2015 animal study showed that pomegranate extract helped inhibit the nervous system’s response to certain harmful or potentially harmful stimuli. In another study, published in the Journal of Strength and Conditioning Research, pomegranate juice helped reduce a certain amount of muscle weakness and soreness in seventeen men, who did resistance training. However, its efficacy needs further research.  [18] [19] [20] [21]

Chamomile tea, made by steeping chamomile flowers, is a traditional remedy for muscle spasms, back pain, and rheumatic pain. According to Herbal Medicine authored by Joanne Barnes, Linda Anderson and J David Phillipson, both the varieties, German and Roman chamomile, have antispasmodic properties. However, some people may have an allergic reaction to chamomile. [22] [23] [24]

Chamomile tea is an excellent choice for a before-bed drink. Photo Credit: Shutterstock

Omega-3 EFA fish oil supplements, according to research published in the Surgical Neurology, can be a safer alternative to NSAIDs (Nonsteroidal Anti-inflammatory Drugs) to treat nonsurgical acute and chronic neck or back pain. Researchers also found that 1200 mg per day of omega-3 EFAs taken consistently had an equivalent effect of ibuprofen in reducing arthritic pain. [26]

Boswellia serrata is one of the ancient and most valued herbs in Ayurveda, especially for its anti-inflammatory properties. According to the Indian Journal of Pharmaceutical Sciences, research from a clinical trial showed that the herb can help reduce knee joint pain. It is also useful in reducing sciatic pain.  [27]

Chili peppers have been used by native American for various medicinal purposes for many years. Capsaicin, a naturally occurring alkaloid present in plants of Capsicum genus (chili pepper), has a regional anesthetic effect and is an effective natural muscle relaxant. Over-the-counter capsaicin creams are available to treat sciatica and back pain. [28] [29]

The traditional way to treat musculoskeletal pain involves the Rest, Ice, Compression, and Evelavation (RICE) treatment. If you feel a muscle spasm, it is advisable to first rest and protect the injured area and avoid any jerky movements. Apply an ice pack to help naturally relax the muscles and reduce swelling. A 10-20 minute application of the ice pack 3 times a day will help. Wrapping or compression of the injured area helps decrease swelling; however, it is best to show it to a doctor as it can cause a numbing effect if done too tightly. Elevate the area above your heart level to help minimize swelling. The RICE treatment can be the first step to help avoid worsening the pain. It is advisable to consult your doctor to treat sharp and acute pain.