Umibudo (Sea Grapes): Taste, Benefits, & How To Use

Umibudo, a seaweed popularly known as green caviar, is one of the iconic side dishes in Okinawa, Japan. Okinawans believe that the green, pearly strands of seaweed help them maintain their legendary health and long lifespan. The word ‘umibudo’ literally means sea (umi) and grapes (budo) in Japanese. These seagrapes are growing in popularity across the world due to the resemblance to fish roe and their natural ocean flavor.

What is Umibudo (Sea Grapes)?

Umibudo (Caulerpa lentillifera) is an edible seaweed that is considered a delicacy due to its sweet, salty taste and pearl-like bubbles that pop in the mouth when you eat them. This popping of the seagrapes is one of the biggest factors for their popularity and in Japanese, the sensation is described as “Puchi Puchi“, an onomatopoeia mimicking the sound of the pops. The little seagrapes release an umami flavor, a play between sweetness and brine, that are reminiscent of fresh clams. [1]

Seagrapes are a staple in Southeast Asian and Pacific island countries such as Japan, Malaysia, and the Philippines. In Okinawa, they are considered an important crop. [2] 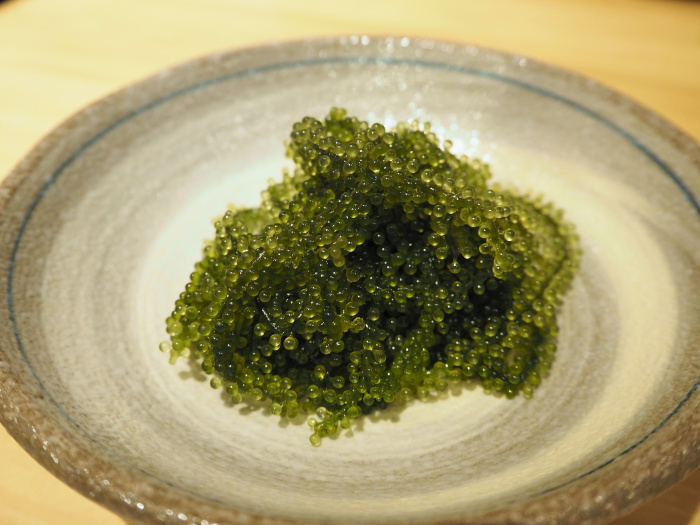 Umibudo or sea grapes are considered a delicacy in Japan. Photo Credit: Shutterstock

Researchers have found that this particular seaweed is rich in protein and minerals like phosphorus, calcium, magnesium, and copper. It also contains vitamins A, C, E, and some amounts of thiamin, riboflavin, and niacin. Like most seaweeds, it has a high level of iodine. [3]

In Okinawa, umibudo is called ‘longevity seaweeds’ as the people believe that it has powerful health benefits and anti-aging abilities. There are few scientific reports available to fully understand the therapeutic potential of this seaweed. Research indicates that umibudo can be an excellent source of plant-based protein for people on alternative diets. Animal models have also shown that seagrapes can have a cardiovascular protective effect due to their phenolic compound and antioxidants content. Consuming seaweed regularly may also help in weight loss and regulate cholesterol levels. [4] [5] [6] [7] [8]

Making seaweeds as part of your daily diet can also aid in skincare. Antioxidant-rich seaweeds are often used for their antibacterial, anti-acne, moisturizing, and skin-whitening properties in cosmetic and personal care products. [9] [10]

How To Buy & Use Umibudo?

If you do not have access to fresh umibudo, you can buy the dehydrated version from trustworthy online retailers. In Japan too, it is sold in dehydrated form as the shelf life of freshly harvested seaweed is quite short.

Dehydrated umibudo is packed in a fresh saltwater brine and comes with instructions on how to use it. Generally, you need to wash the umibudo and keep it in a bowl of water for a few minutes to allow for it to plump up to its original pearl-like appearance. The umibudo is ready to eat.

You can eat umibudo just as is and enjoy the taste of the ocean in your mouth. It also tastes wonderful when dipped lightly in ponzu sauce, which is a kind of citrusy soy sauce. You can also use a dressing of soy sauce, mirin, and vinegar. Umibudo is often used in Japan as a topping for dishes or served with sashimi. It is best eaten raw as it loses its unique flavor and texture when cooked. Umibudo offers a lovely textural contrast to dishes such as sushi, tuna salad, or just a simple poached egg. Here are our recommendations: