In a day and age, when more and more people are making the shift from processed foods to authentic, home-cooked, and wholesome meals, a groundswell of interest in the largely unexplored West African cuisine comes as a breath of fresh air. The newfound appreciation for the cuisine stems from the fact that West African dishes are usually gluten-free and high in plant-based protein, conforming with the recent trends. This is perhaps why the Fifth Whole Foods Market’s Annual Food Trends Predictions forecast the cuisine (with its rich, earthy and distinct flavor), to take off in a big way in 2020. However, what is the cuisine all about and what are the dishes that you must try? Let us find out. [1]

What is West African Cuisine?

Consequently, the dishes are gluten-free and rich in plant-based protein, which explains why it is gaining popularity in an increasingly health-conscious society. This is also perhaps why, numerous brands are seen turning towards the West African region for its superfoods, which they claim has the potential to improve one’s overall health and wellbeing. [2]

This cuisine puts a great deal of emphasis on the use of tropical fruits, fresh vegetables, starches, and meats. West Africa is warm throughout the year given its geographical proximity to the equator. It has a brief but intense rainy season between June and September, due to the intersecting trade winds that cause a lot of moisture in the atmosphere.

Needless to say, this weather is conducive for the growth of tropical fruits such as melons, coconuts, mangoes, tomatoes, and tropical vegetables like okra, bell peppers, corn, peas, beans, moringa, swiss chard, cabbage, and yams to name a few. Surprisingly, West Africans are not too big on salads and you will not find it in their cuisine. The region also has a coastline, which explains why fish and seafood are the most common forms of protein that the West African cuisine has to offer. Cayenne peppers, ginger, and chilies are the most common form of spices used in the cuisine. West Africans use Scotch bonnet chile peppers with a liberal hand in many of their sauces and stews. 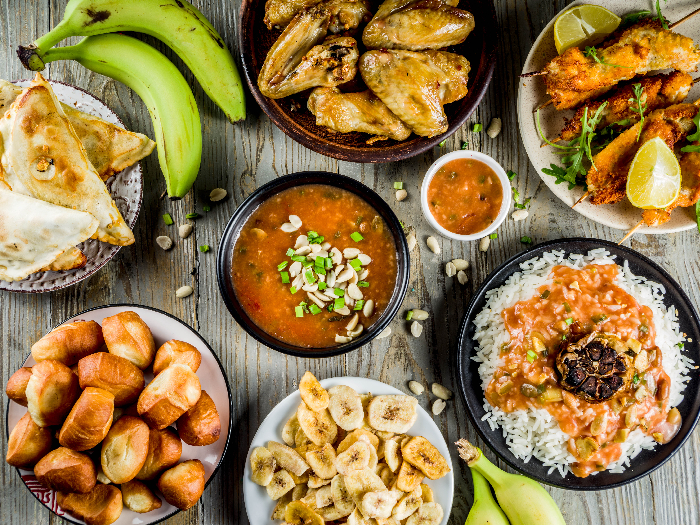 From Cape Verde to Cameroon and all of the countries in between, here are a few prominent tasty dishes from the West African cuisine that are a must-try, particularly for those who are looking to expand their palates with these diverse flavors.

Thieboudienne is a traditional Senegalese dish, which is made of freshwater fish, rice, and tomato sauce. The delicacy is flavored with spiced vegetables like cabbage, carrots, onions, cassava, and peanut oil. If we were to describe the taste of this dish, it is a lot like the very famous American (Southern) dish called Savannah red rice. The bright and acidic tomatoes give the rice a complex yet subtle flavor. The dish is cooked in a pot, so the rice on the bottom of the pot develops a crisp crust while the part on top develops a fluffy texture. This somewhat spicy and savory baked rice recipe can stand on its own as a main dish or be served along with freshwater fish, shrimps or chicken. Beef is relatively uncommon in West Africa, whereas chicken, pork and goat are more popular. 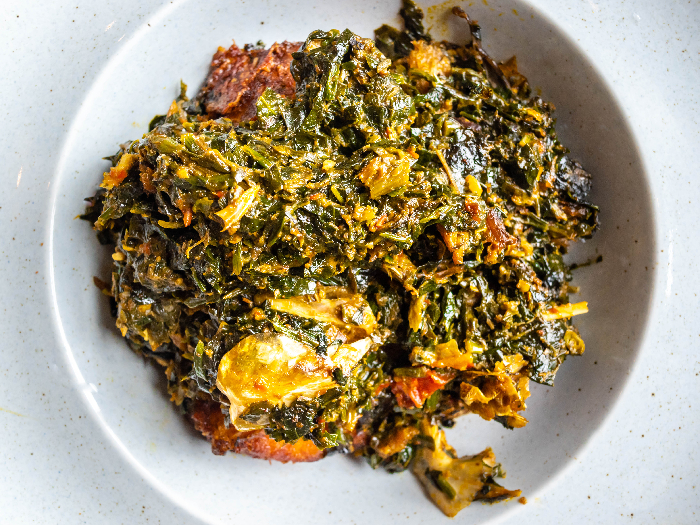 A famous West African vegetarian delicacy is the Nigerian stew, commonly known as the Yoruba Egusi soup, which uses melon seeds, (though these could be alternatively used for squash or gourd seeds), as well as spinach and beans. Egusi has a typical taste and aroma so cooking the ingredients (especially the seeds) on low flame for a longer period of time will allow the ingredients to perfectly blend with one another, giving out the authentic flavor of the soup.

Interestingly, the taste and texture of the soup vary depending on which part of Nigeria it originates from. If you are having the Southwest Nigerian version of the soup, you will find it to be quite lumpy in texture. Nigerian food, like most West African food, is predominantly cooked in palm oil. However, due to the numerous ethical issues involving the effects of palm oil’s production on the environment and wildlife, you can use peanut oil as an alternative.  [3]

West African dishes are predominantly carbohydrate-heavy that ease hunger pangs keeping you full for a longer time. Cassava is another favored starchy food, which is usually milled into flour and used for making a slightly sour and viscous dough known as fufu. Fufu is often served with soups and stews. It is broken into small chunks and put into the soup and often used as a spoon to eat it.

If there is one dish that is synonymous with the West African region, it has to be jollof rice. It is spiced and stewed in a flavorful tomato broth. Each of the 16 countries in the region has its own version of the dish. It is usually cooked with long grain rice and characteristically seasoned with curry powder and thyme. You can also make a smoky version of the same by cooking it over an open fire, layered with smoke and spice. You can add any vegetables of your choice and serve it alongside freshwater fish, shrimps or chicken. 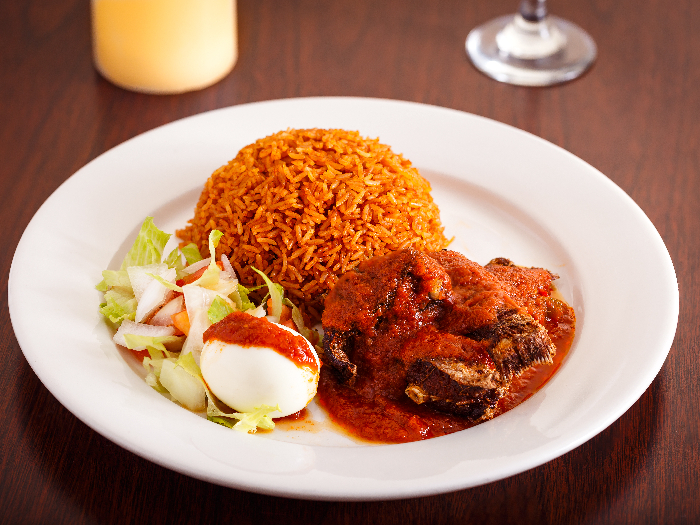 Starchy food is the primary food component in a West African diet. The weather in the region is conducive to the growth of starchy plants. As a result, they are found in plenty at supermarkets and are quite inexpensive. Yams, corn, millet, rice, black-eyed peas, and sweet potatoes are popular forms of starches in the cuisine. An interesting dish made of Yoruba yams, known as, Asaro, is a traditional porridge, which is prepared by boiling and mashing yams in a broth made out of tomatoes, red bell peppers, and scotch bonnet peppers.

The West African cuisine also uses plantains a lot, which are technically a fruit. Many confuse plantains with bananas but the former is larger and much less sweet than the latter. They are also extremely starchy and mostly used in making chips, cakes, and mashes. Spicy Fried Plantains, also known as Kelewele or Aloco, is an African dish comprising spicy fried ripe plantains, which are soft on the inside but crunchy on the outside. It goes very well with peanuts on the side. [4]

As far as local beverages are concerned, beer is the most preferred drink among the West Africans. Contrary to popular belief, good coffee is somewhat rare in West Africa, except perhaps in the Gold Coast, which is the largest exporter of coffee beans. However, it is quite expensive for the local masses to purchase, which explains why they don’t feature in their cuisine as much.

The West African foodservice scene is flourishing, thanks to its use of natural and easy-to-find ingredients, which when paired with contemporary cooking methods makes for a tasty, innovative and wholesome food experience. So perhaps the next time you plan to invite friends over for dinner, give this cuisine a try! You can purchase most of the ingredients from specialized grocery stores like Whole Foods Market and online e-commerce portals like Amazon.