Squash: Top 5 Benefits & How To Use

Squash is probably one of the most versatile and delicious foods available throughout the world, and it packs a serious punch in terms of possible health and medicinal benefits. Different varieties of squash may have different benefits, which may include the ability to improve heart health and aid in diabetes management. These fiber-rich vegetables might also help normalize blood pressure levels.

Squash is a broad term that encompasses several different species of plants, including pumpkins, zucchinis, courgettes, and marrows. The individual species include dozens of varieties, including buttercup, Hubbard, cushaw, acorn, summer, autumn, and winter squash. They have many overlapping characteristics and belong to the genus Cucurbita. In North America, most of the varieties are simplified into either summer or winter squashes. Squash also often includes gourds, of which there are many classifications as well. For more information, you can head over to 8 Types Of Squash Fruits You Need To Know.

Not only are squash varieties probably one of the largest groups of foods, but they are also some of the oldest cultivated crops on earth, with archaeological data tracing their origins back to 10,000 years ago in Mesoamerica. They were famously one of the Three Sister crops, cultivated by Native Americans, who eventually shared them with European settlers. These three vegetables were commonly grown together and may have mostly included corn (maize), beans, and squash. They possibly provided the staple elements of the diet of early American culture and some other cultures throughout the region. [1] 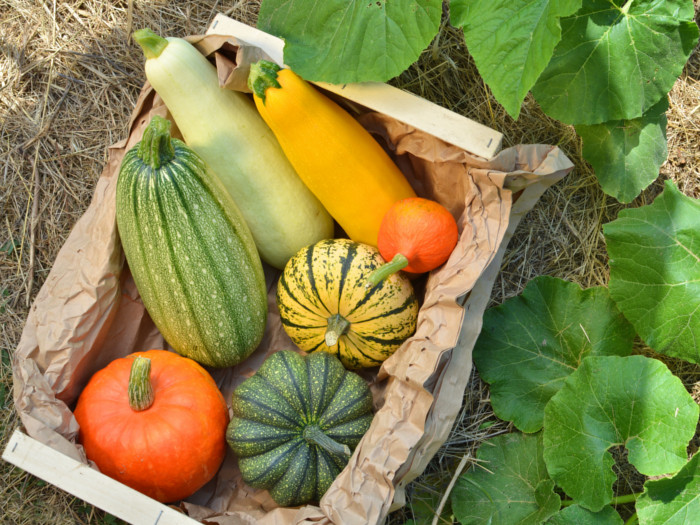 Squashes, especially the yellow-colored variety, are an important source of dietary carotenoids. Carotenes, chiefly α-carotene and β-carotene, are precursors to vitamin A, which may have a significant role in vision and in maintaining a healthy immune system. Other important carotenoids present are lutein and zeaxanthin. Both varieties – winter and summer squashes – are rich sources of vitamins A, C, and K, according to the USDA. In terms of minerals, squash contains magnesium, potassium, manganese, copper, phosphorus, calcium, and iron. [2] [3] [4] [5]

Let’s look at the most important squash benefits.

As mentioned above, squashes like the yellow-colored crookneck squash and orange-colored pumpkins contain a high level of carotenoids. These carotenoids are mainly beta-carotene, lutein, zeaxanthin, and lycopene. Research shows that the intake of carotenoids is associated with the prevention and treatment of age-related macular degeneration, cardiovascular diseases, and neurodegenerative diseases. [6] [7]

May Help In Diabetes Management

According to the Harvard T.H. Chan School of Public Health, winter squash has a very low glycemic index, which may help in stabilizing sugar levels. Certain varieties like pumpkin contain possibly good amounts of dietary fiber and may include the polysaccharide known as pectin. Pectin is an essential element in blood sugar regulation throughout the body, making sure that the insulin and glucose activities within the body remain constant and smooth. In a rat model, pumpkin polysaccharides showed a powerful glucose tolerance effect, suggesting that it can also help reduce the risk of type 2 diabetes. [8] [9] [10] 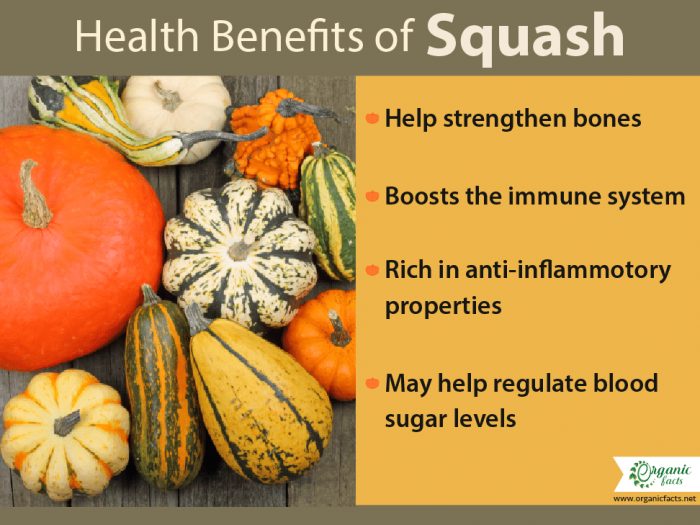 Squash is a broad term that encompasses several different species of plants, including pumpkins, zucchinis, courgettes, and marrows.

In the Massachusetts Health Care Panel Study, researchers reported a positive association between the consumption of carotenoid-rich vegetables such as carrots and/or squash and cardiovascular disease (CVD) mortality. For total CVD death and fatal myocardial infarction, risks were lower among those individuals in the highest quartile for the consumption of carotene-containing fruits and vegetables as compared with those in the lowest. [11]

It may be hard to believe, but a single serving of squash can contain more than 400% of your daily requirement for vitamin A, due to the rich content of beta-carotene found in it. Beta-carotene can be split by an enzyme to form vitamin A, but the body might only convert as much as is necessary. In other words, eating this vegetable might give your body all the vitamin A it needs, possibly with plenty of beta-carotene to spare. Beta-carotene is an antioxidant compound essential for good eye health. High levels of beta-carotene have been connected with reduced chances of macular degeneration, cataracts, glaucoma, and other vision issues. [14]

How To Cook & Use Squash?

When it comes to culinary applications, squash can be extremely versatile and is commonly used as an element of salads when fresh. They can be cooked as baked vegetables with meat, flattened into patties, fried, or included as a base flavor for soups. Squash seeds are also edible and can be made into many forms or their oils can be extracted. The shoots and tendrils of the plant can also be eaten as greens in a salad. Some of our favorite squash recipes are: [15]

Word of Caution: There are so many wonderful benefits of squash, but it is important to recognize some of the potential problems. Toxic squash syndrome can occur due to cucurbit poisoning, though it is quite rare. Squashes contain a compound called cucurbit E. that causes a reaction in certain people. According to a March 2018 report in the JAMA, two unrelated women in France fell ill and lost hair due to cucurbit poisoning. Other side effects include nausea, vomiting, and diarrhea. To reduce the chances of this syndrome, it is advisable to avoid the extremely bitter-tasting ones. [16]

Other than that, enjoy the health benefits of squash in all your seasonal meals!

Rate this article
Average rating 4.0 out of 5.0 based on 544 user(s).
Read This Next:
Popular Articles