The health benefits of sardines may include the prevention of heart diseases and age-related macular degeneration. They may also help strengthen bones, boost the immune system, improve insulin resistance, and rejuvenate the skin.

The most popular species of sardines include Sardina, Sardinops, sardinella, and dussumieria. These fish are found mostly in the Atlantic and Pacific oceans, as well as in the Mediterranean Sea. According to a report, in the past, they were the most harvested fish around the world. [1] 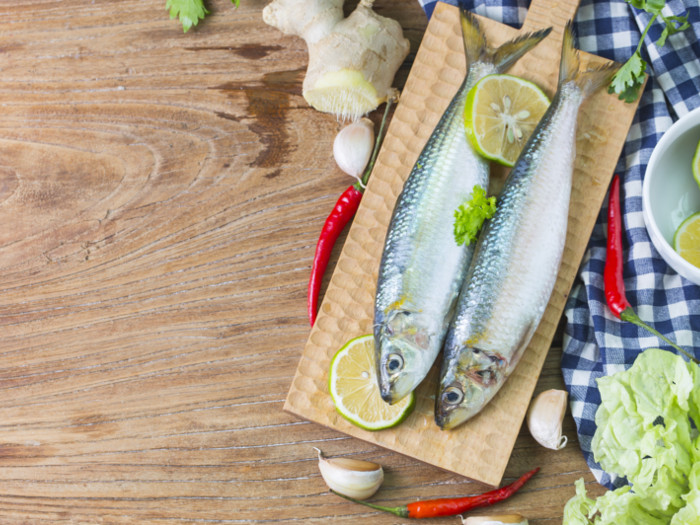 According to USDA, fish oil made from sardines contains energy and fats. Vitamins may include thiamin, riboflavin, niacin, vitamin B6, folate, vitamin B12, vitamin A, vitamin D, vitamin E, and vitamin K. The fatty acids found in them include total saturated fats, monounsaturated fats, polyunsaturated fats, and cholesterol. These fatty acids, vitamins, and trace mineral elements may help in the prevention of many diseases and promote overall health.

May Prevent of Heart Diseases

Sardines can be rich in omega-3 fatty acids, which might be helpful in preventing heart diseases. Research by the Department of Food Science and Nutrition, University of Minnesota has shown that omega-3 fatty acids such as EPA (Eicosapentaenoic acid) and DHA (Docosahexaenoic acid) break down bad or LDL cholesterol in the body and thus help in preventing heart diseases.

Blood clots in the arteries can be dangerous for the cardiovascular system. Regular intake of omega-3 fats found in fish like sardines might be good for the heart because it may help in reducing cholesterol and blood pressure, thereby preventing stroke and atherosclerosis.

A fact sheet released by the National Eye Institute (NEI) says that age-related macular degeneration (AMD) is a condition that is usually seen among people aged 50 or more. Macular and retinal degeneration over the years results in loss of vision. Both NEI and the European Journal of Clinical Nutrition suggest that usage of fish like sardines may result in a reduced risk of developing AMD.

A cancer research report published by Dr. Powel Brown and Dr. Corey Speers in the Journal of the National Cancer Institute has shown that the intake of calcium and vitamin D might be very helpful in preventing certain types of cancers like breast cancer. Sardines are one of the best sources of calcium and vitamin D. However, more research and clinical trials are required.

Sardines can be a good source of calcium, and regular calcium may help in strengthening bones. A good amount of calcium, coupled with exercise might strengthen bones and prevent diseases such as osteoporosis.

May Help in Maintaining a Healthy Immune System

Consuming sardines may help in building up the immune system. Research by The Journal of Nutrition suggests that sardine fish oil may improve the immune system by increasing the count of immune cells.

The fats found in sardines may play an essential role at the cellular level in skin cells. The book “Forever Young: The Science of Nutrigenomics for Glowing, Wrinkle-Free Skin and Radiant Health at Every Age” by Dr. Nicholas Perricone says that sardines (cold water fish) may help in giving you radiant skin.

May Help with Insulin Resistance

Insulin resistance is one of the major factors to look for in diabetes. In cases where there is insulin resistance, the insulin produced in the body is utilized less efficiently. This, in turn, means that there is more glucose in the blood than there usually should be. According to a 2012 study published in the International Journal of Molecular Medicine, sardine protein consumption may have a beneficial effect on fructose-induced metabolic syndrome on variables such as hyperglycemia, insulin resistance, hyperlipidemia, and oxidative and inflammatory status.

Sardines contain selenium, which may be helpful in neutralizing free radicals and protecting organs from damage.

Sardines are available in many varieties and are cheap compared to some other fishes. They are best when consumed fresh. Canned ones come in a variety of flavors, such as mustard flavor, seasoned with sauce, with or without salt, and other versions, and should be stored in a cool place. Depending on the taste, people make their own choice. Please do check the expiry date on the can.

High Purine Content: Sardines may contain a high amount of purines. Purines are basic structures that form DNA and RNA. These purines break up into uric acid. High levels of uric acid concentrations are known to put a great deal of pressure on kidneys as they have to flush out excess amounts of uric acid. Purines should also be avoided in case of gout attacks.

Higher Levels of Mercury: Sardines may contain a low amount of mercury naturally. However, in recent times, due to mercury-filled pollutants being released into the atmosphere, which eventually makes their way into the ocean, mercury inevitably gets absorbed by the sardine fish. Their consumption may result in poisoning. However, in normal quantities, this should not occur.

Allergic Reactions: Sardines may cause allergic reactions in some people. Research shows that some organic compounds known as vasoactive amines such as tyramine, serotonin, tryptamine, phenylethylamine, and histamine are found in them. These can cause allergic reactions such as the constriction of the intestinal muscles, increased heart rate, headache, asthma, bronchitis, constriction of blood vessels, and hypertension. In most cases, very high ingestion of the above-mentioned compounds may result in these symptoms.

Rate this article
Average rating 3.9 out of 5.0 based on 428 user(s).
Read This Next:
Popular Articles