Wood Apple: How To Eat & Benefits

There are a few tropical fruits that can look or smell bewildering but have a faithful fan following worldwide, such as jackfruit and durian. Wood apple is one of these kinds of fruits but is yet to make its mark in many countries outside of Southeast Asia.

To make matters a bit more mysterious, wood apple is not just one fruit but a generic name for several trees of the Aurantioideae subfamily within the rue and the citrus family. Botanically, Aurantioideae are characterized by small trees or shrubs with fragrant white flowers and fruits that have either a granular peel or an extremely hard shell. In this article, we delve into details on the fruit of the tree – the wood apple. [1]

What Is A Wood Apple?

As mentioned above, wood apple is a generic name given to fruits that belong to trees from the Aurantioideae subfamily. Here are two fruits that are relatively well-known:

To add to the confusion, both the fruits are interchangeably called wood apples, bael fruit, bel, and even elephant apple in different regions of Southeast Asia. However, both can have different textures, fragrances, and tastes. Let’s find more.

Bael fruit is a round or oval fruit that may have a thin, hard, woody shell or a gray-green rind that turns more yellow when ripe. You can find bael fruit trees in many temple gardens in India as the tree is considered sacred and the leaves are often used in religious ceremonies. [3] 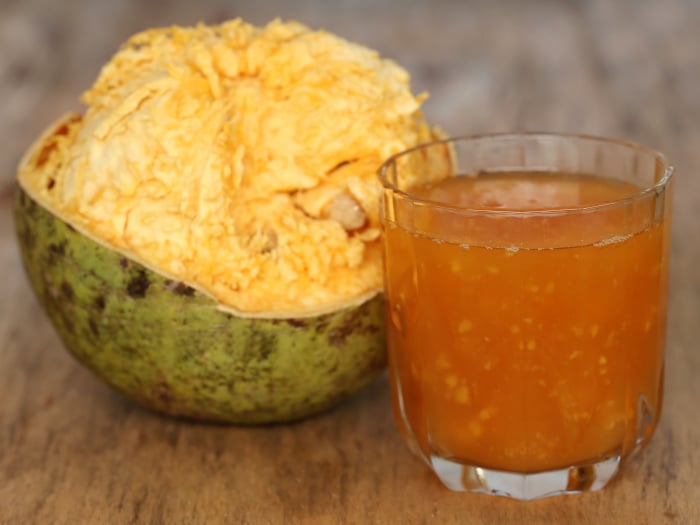 Refreshing bael fruit juice made from the fruit pulp is a summertime treat. Photo Credit: Shutterstock

How To Eat A Wood Apple/Bael Fruit?

You can cut the rind of the bael fruit with a knife and easily access the aromatic pulp. You can choose to either peel it like an apple or cut it into half and scoop out the flesh. For a harder rind bael fruit, you may need to knock it a few times with the backside of a heavy knife. Once the rind cracks, you can gently pull it apart. [4]

The flesh of the bael fruit can range from a mild orange color to a caramel brown and is fragrant, reminiscent of honey, and bananas. The flesh contains seeds that have wooly hairs and some mucilage that hardens on drying. Bael fruit can be eaten and used in several ways:

According to a report by Purdue University, Illinois, 100 grams of fresh bael fruit can contain 2 grams of protein and very little fat. It might be a good source of carotene, thiamine, riboflavin, niacin, and vitamin C. The fruit, bark, leaves, roots, and seeds have been extensively used medicinally in Ayurveda for thousands of years for stomach-related ailments, ulcers, tuberculosis, and hepatitis. Most of the research studies on the health benefits of bael fruit have been done in India. The most important bael fruit benefits are: [6] [7]

Bael fruit is available in dried form or as a medicinal powder on e-commerce websites as more people are becoming aware of its health benefits.

Word of Caution: Researchers have found that the fruit is generally safe to consume. However, too much of it can cause constipation in certain individuals. [13]

Unlike bael fruit, the Limonia acidissima variety is a little less known worldwide. This variety of wood apples has an extremely hard graying green exterior and almost looks and feels like a moldy shaved coconut. The hard exterior is why this fruit has been called a wood apple. In some parts of the world, this fruit is called elephant apple because it is a favorite food of elephants. While most varieties are large in size (5 inches), there are other varieties that are much smaller and can have an acidic taste. [14] 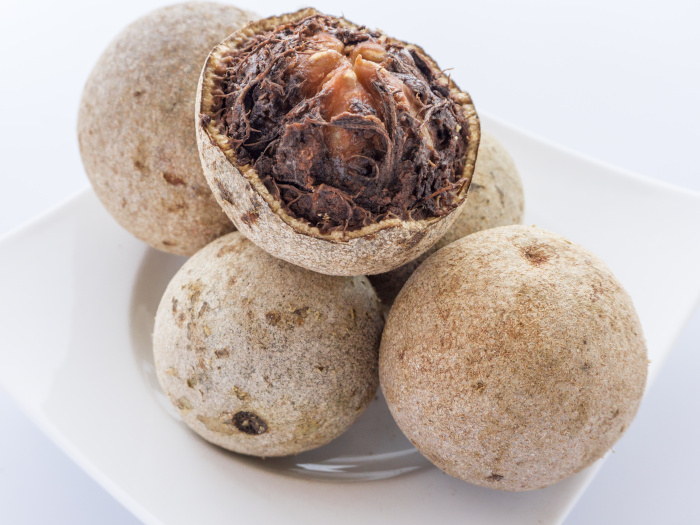 Wood apple, or Limonia acidissima, is not as commonly found as bael fruit. Photo Credit: Shutterstock

This variety of wood apples requires a hammer to break it open. In many countries, they wrap the fruit in a towel and knock it on the floor to crack the other shell. The aroma of this wood apple can quickly divide people into the ones who turn up their nose or others who love it. Once cut open, the flesh is fibrous, dark brown in color, and has a sharp smell – like a mixture of blue cheese and raisins. It has a mealy texture and a sour-sweet taste (similar to tamarind) which may need getting used to if you are having it for the first time.

Similar to bael fruit, the pulp can be eaten raw, but it is popularly scooped out and frozen or made into jam. It can also be mixed with coconut milk for a delicious beverage, or frozen into ice cream. Wood apples can also be used to make jams, jellies, and chutneys. [15] [16]

Wood apple might have been traditionally used in India as a liver and cardiac tonic. The unripe fruit may have astringent properties that can effectively halt diarrhea and treat sore throat. As a traditional remedy, the fruit pulp or the powdered rind can be used as a poultice for insect bites and stings. Like the bael fruit, the fruits, seeds, roots, and the bark of Limonia acidissima have all been used in folklore remedies for many years. [17]

According to an analysis, wood apple (Limonia acidissima) might contain a considerable amount of protein, carbohydrate, iron, and fat. The pulp also has pectin fiber and tannins. It might be a good source of calcium, vitamin C, zinc, and sodium. [18]

There are not many studies done on this variety. The proven benefits of wood apple (Limonia acidissima) are:

This variety of wood apples are also being explored for cosmetic purposes as it might be a rich source of antioxidants such as polyphenols, flavonoids, saponins, and vitamin C. [23] [24]

Word of caution: Anecdotal evidence shows that excessive consumption of Limonia acidissima may cause a laxative effect.