Granola is composed of rolled oats, which are oat groats that have been pressed flat and lightly steamed, as well as honey, nuts, and puffed rice. The entire mixture is baked until crispy and can then be taken anywhere quite conveniently for an energy-boosting snack.

Most commonly, granola is regularly used by people on the go, as well as by hikers, campers, and outdoor-oriented people who won’t have a refrigerator for their food and don’t want to worry about crushing anything that they plan to eat.

When eaten at home, granola is often combined with yogurt, honey, strawberries, bananas, and other types of fruit, or is mixed in with other cereals to boost their nutritive value. It was developed in a number of ways, both in the United States and Australia. It has seen surges and declines in popularity over the years, but the advent of the granola bar was when it truly hit the mainstream consumers around the world. It is now widely used because of its undeniable health benefits, convenience, delicious taste, and versatility in various meals. 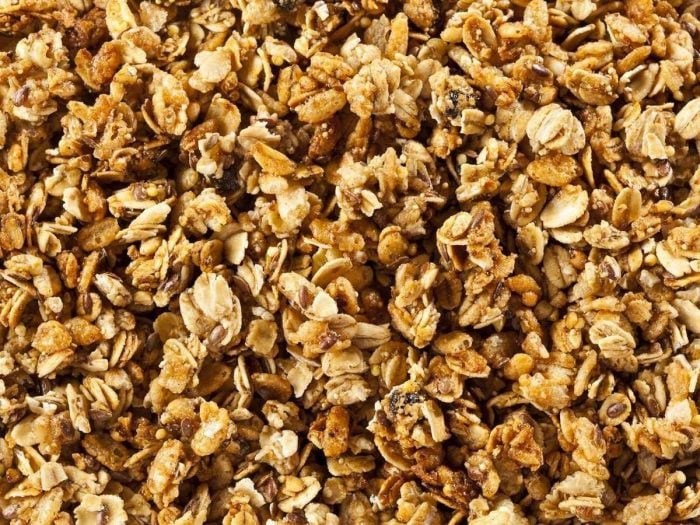 Granola cereal is a wise addition to a healthy diet. Photo Credit: Shutterstock

The long list of health benefits commonly attributed to granola is probably due to its nutrients including dietary fiber. The minerals in it include sodium, potassium, zinc, phosphorus, magnesium, calcium, and iron. Vitamins include vitamin E, vitamin C, niacin, vitamin E, and thiamin. [2]

Those health benefits are explained in greater detail below.

As a digestive aid, granola is almost unmatched. It is commonly consumed by people who want a boost in their fiber intake because granola contains both soluble and insoluble fiber. Dietary fiber is a beneficial part of anyone’s eating habits because it regulates digestion. It can add bulk and weight to bowel movements, making them more solid and easier to pass along the digestive tract. It may also stimulate peristaltic motion, which is when the smooth muscles in the intestinal system contract, thereby moving food further along, while also causing the release of gastric and digestive juices, thus relieving stress on the entire system. [3]

Soluble fiber can be good for alleviating symptoms of constipation, which can lead to a bevy of health issues. The insoluble fiber can harden up loose stools and reduce the occurrence of diarrhea. Furthermore, fiber can improve heart health by literally scraping the arteries clean of dangerous LDL cholesterol or omega-6 fatty acids that can lead to heart conditions like atherosclerosis, heart attack, and stroke.

One of the best parts of eating granola is that it is a light, yet a filling food that delivers a healthy boost to the body in a number of ways. It can be very low in cholesterol and sodium, both of which are culprits behind chronic obesity. Also, the fiber in granola makes the body feel full because it bulks up food and absorbs water. Therefore, it may reduce appetite and inhibits the release of ghrelin, which is the hormone that makes the body feel hungry. This can help prevent overeating, which is common for obese people, as well as those on diets which leave them hungry at unusual times of the day. [4]

The soluble fiber in granola is a known way to reduce harmful LDL cholesterol and promote the spread of HDL cholesterol (yes, it does exist!) throughout the body. By reducing harmful cholesterol in the bloodstream, you can prevent the development of plaque in your arteries and veins. This sort of plaque can result in increased blood pressure and strain on the cardiovascular system. [5]

Be sure to buy granola that is not supplemented with hydrogenated oils, however, as they can increase the levels of negative cholesterol and reduce positive cholesterol, thereby negating the effects of the dietary fiber in granola. Many preparations of granola include nuts like almonds and walnuts, which are great sources of omega-3 fatty acids (also known as good or HDL cholesterol).

The other reason that many outdoor hikers and campers take granola on their trip is that it is a concentrated form of energy, and will help give you that extra boost when you need it most. It doesn’t fill your body with sugars, which will eventually cause you to crash and feel sluggish, and instead, it gives you manganese, which is probably one of the least talked about but most integral minerals in the body. [6]

It is important for the liver, kidneys, and metabolic activity. Granola stimulates the tissues and the proper distribution of resources throughout the body. Proper metabolic function means that your body is working efficiently, and your energy needs can be accounted for.

Granola contains low levels of vitamin C, which is a natural antioxidant. A naturopath, Kathleen A Head, published a report in the Alternative Medicine Review-Journal, that states that Vitamin C generally boosts the immune system, stimulates the white blood cells, and can prevent cancer from forming or metastasizing. However, the real connection that researchers are focusing on now is the importance of manganese in the prevention of cancer. [7]

The possibly high manganese content of granola is shown to have major antioxidant properties.  According to the National Cancer Institute, antioxidants are beneficial compounds that seek out free radicals, the by-products of cellular metabolism that mutate healthy cells into cancerous ones by changing the DNA structure. By eliminating free radicals with antioxidants like manganese, you can reduce the chances of getting many dangerous conditions. [8] [9]

May Aid in Prevention of Anemia

Anemia is a condition that affects millions of people all around the world, but many of them don’t realize they are suffering. Basically, it is a deficiency of iron in the blood, which is an essential part of building red blood cells. Anemia can result in excess fatigue, headaches, cognitive malfunctions, depression, and intestinal disorders. Granola has a significant amount of iron, so it counteracts many of the symptoms of anemia. Some ready-made granola is even further enriched with iron supplementation, versus granola that is made at home. [10]

People often say that breakfast is the most important meal of the day and that it keeps your brain working throughout the day. That is especially true if you add granola to that since it reduces blood pressure in the body. Probably, by being fairly high in potassium and low in sodium, granola helps with hypertension by acting as a vasodilator. When blood pressure is lowered, the veins are loosened, stress on the system is reduced, and increased blood and oxygen flow can occur. Increased oxygen and blood flow to the brain can boost cognitive function and increase the speed of nervous response and the formation of neural pathways. This is the same reason that bananas are often called “brain food” because their potassium levels stimulate high mental functioning. [11] [12]

Granola’s possible effect on reducing the blood pressure obviously helps heart health as well, by relieving the strain on the cardiovascular system, and also lowering the chances of atherosclerosis, strokes, and other potentially deadly conditions. You should supplement the potassium content of granola with fresh fruit, a delicious and common combination for breakfast or on the go for a snack.

Granola is probably a good source of vitamin E, also known as alpha-tocopherol, and a single serving can provide you with almost 20% of your daily requirement. Vitamin E affects a number of bodily processes, which may include the protection of skin from premature aging, sunburn, and wrinkles, strengthening capillary walls and improving heart health, and increasing blood flow to extremities so hair follicles and nails retain their integrity. If you do get a sunburn, it can help reduce the associated pain and redness. Overall, the large amount of vitamin E in granola alone makes it a great choice for a breakfast booster. [13]

The manganese content in granola is known to be high and the effects that it can have on the body are quite impressive. In terms of diabetes management, manganese can be a regulator of blood sugar in the body and can stimulate or inhibit the release of insulin. According to a study published in the BMC Endocrine Disorders Journal, people with high blood manganese levels have a decreased prevalence of diabetes. However, more studies are required to determine any protective effects of manganese on the disease. By regulating the blood sugar levels, it can reduce the chances of spikes and drops that can make life so difficult for those with diabetes. [14]

Besides its effects on diabetes, manganese also is a co-factor in the production of energy from food, as per a study published in the American Journal of Clinical Nutrition. It also plays a major role in increasing the speed of wound healing, sex hormone production, and regulation, as well as the production of new tissues to speed up cellular and organ repair. [15]

Word of Caution: That may have been an impressive list of health benefits, but granola can have some harmful effects on the body, and there is some controversy about eating too much of this powerful food. Granola is basically carbohydrates cooked in fat, which can produce some chemical molecules that the body cannot digest. However, different preparations of granola can result in many different chemical compositions.

The puffed rice which commonly is included in granola has little nutritional value but does act as a filler and a source of empty calories. Look for varieties that have no puffed rice, and you can avoid that negative side effect. Inulin is a common polysaccharide that is made of indigestible fructans, and it can take the body time and energy to digest it properly. This may result in some bloating or flatulence initially, followed by a marked improvement in digestion.

Eat granola in moderation, pay attention to your body, and be patient; it is definitely good for you over the long term!