The health benefits of manganese include healthy bones and better metabolism. It also acts as a co-enzyme to assist metabolic activities in the human body. Manganese also helps in the formation of connective tissues, absorption of calcium, and proper functioning of the thyroid gland and sex hormones. It is an important mineral when it comes to regulation of blood sugar level and proper metabolism of fats and carbohydrates.

Manganese is a naturally occurring mineral in our body. It is an actual component of the manganese superoxide dismutase enzyme. It is a powerful antioxidant that seeks out the free radicals in the human body and neutralizes these damaging particles, thereby preventing many of the potential dangers they cause. [1]

The body may contain, at most, 20 mg of manganese, which is concentrated in our kidneys, pancreas, liver, and bones. It is very important for the normal functioning of the brain and the proper activity of our nervous system throughout the body. As far as research can tell, it is an essential trace mineral for every form of life.

The symptoms of manganese deficiency include high blood pressure, heart ailments, muscular contraction, bone malformation, high cholesterol, poor eyesight, hearing trouble, severe memory loss, shivers, and tremors. Even though some medical experts argue that manganese deficiency is quite rare, more than 35 percent of the world population is possibly deficient. Poor dietary habits are the leading cause of such deficiencies. [2]

In some cases, calcium and iron are believed to interfere with the appropriate use of manganese in the human body. Eye problems, sweating, fast heartbeats, weakness, and severe cramps maybe some of the deficiency symptoms. Severe deficiency may sometimes cause infertility in women, pancreatic damage, heart problems, and osteoporosis.

The most important sources of manganese are as follows: [3]

The health benefits of manganese lead to overall wellness in a variety of ways. Here is a list of the most significant benefits that have been researched: 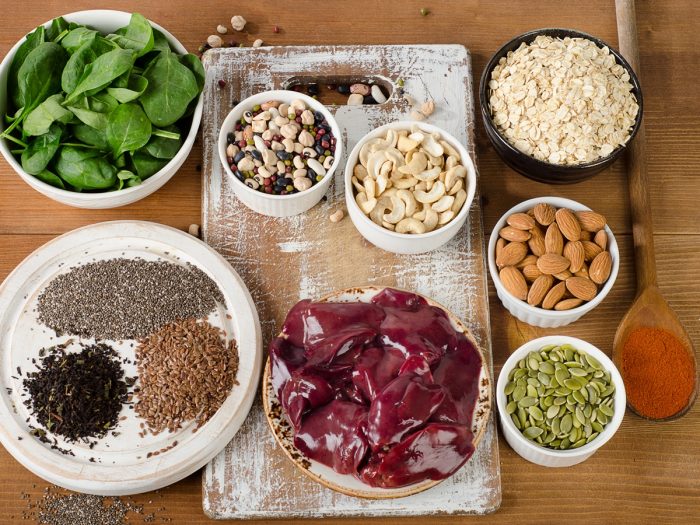 Manganese is essential for the proper growth of human bone structure. It is a very effective mineral for increasing the mineral density of the spinal column, especially in post-menopausal women. Many women suffer from manganese deficiency after they go through menopause, so increasing the intake of this trace mineral is an important factor in preventing fractures. Although research is yet to prove that manganese can prevent osteoporosis, it is believed to be one of the contributing factors that slow down the progress of that debilitating disease. [4]

Manganese has exhibited efficiency in controlling metabolic diseases. This may further prevent the occurrence of certain diseases like diabetes. To control the level of sugar in the blood, manganese normalizes insulin synthesis and secretion, and the unpredictable drops in blood sugar can be better regulated, providing a more normal and functional life for diabetics. [5] [6]

Regulation of the body’s metabolism is one of the vital functions of manganese. Manganese-activated enzymes help in the metabolism of cholesterol, amino acids, and carbohydrates. In addition, it is also important for the metabolism of vitamins like vitamin E and vitamin B1. Furthermore, it helps the liver function properly and runs smoothly. It is an essential part of the metabolism of glutamine and is the most abundant amino acid in the body and a key part of DNA polymerase. [7]

Manganese is a widely known mineral for sprains as well as inflammation as it helps in increasing the level of superoxide dismutase. This increased level is due to the antioxidant properties of the mineral. Superoxide dismutase, also known as SOD, is normally found at very low levels in people with arthritis. SOD has anti-inflammatory qualities that arthritis sufferers desperately need. According to various studies, adding manganese back into the body to increase the synthesis and functioning of SOD has been connected with a decrease in symptoms of arthritis. [8]

Manganese supplements are connected to the relief in osteoporosis and osteoarthritis syndrome because it is an essential mineral that has been proven to add to bone density and overall mineral density. However, as an individual element in the creation and repair of bones, studies are still somewhat lacking. In human testing, at least, most bone health research is done with a complete panel of trace minerals, not just manganese. Further studies have to be done on the specific roles and mechanisms of manganese on the body. [9] [10]

Many women suffer from premenstrual syndrome (PMS). In these situations, manganese helps to alleviate the mood swings, headaches, depression, and irritability to a considerable extent. Studies have shown a connection between low levels of various trace minerals, including manganese, in women who suffered from severe PMS symptoms, so supplementation is recommended. That being said, the impact of manganese on the hormonal function of the body can be quite noticeable, so speak with a doctor before using manganese supplementation to help with PMS, since it is heavily connected to hormones. [11]

Manganese is an important co-factor for many different enzymes, and it is an essential component of thyroxine, arguably the premenstrual syndrome (PMS) hormone in the thyroid gland. Proper functioning of the thyroid gland and its hormonal synthesis benefits a wide variety of health issues in the body, including weight loss, appetite, metabolism, and organ system efficiency. [12]

Manganese is one of the most versatile co-factors for enzymatic reactions. It helps absorb vitamins like vitamin B and E and minerals like magnesium. This is due to the role of manganese in the enzymatic reactions that are required to absorb and utilize vitamins taken in from food. [13]

Manganese is essential for the healthy functioning of the brain and it is also used to treat specific nervous disorders. This is most likely due to the superoxide dismutase (SOD) in it, which scavenges free radicals throughout the body, including the neural pathways. Oxidation byproducts like free radicals are everywhere in the body, and the brain can be negatively affected just as easily as other parts of the body, therefore powerful antioxidants like SOD are required. Apart from its antioxidant role, manganese can also bind with neurotransmitters and stimulate faster or more efficient transmission of electrical impulses throughout the body, in effect, speeding up the cognitive function. [14]

Manganese is a mineral, which is helpful in maintaining the functioning of the digestive tract. This further improves the absorption of fat in the process of digestion, and also reduces issues like constipation and bowel discomfort. Manganese is also important in terms of efficient food utilization and the transformation into usable energy. [15]

The adequate intake suggested by the National Institutes of Health is as follows: [16]

When it comes to pregnant and lactating women, an intake of 2.0 mg and 2.6 mg is recommended.

Word of Caution: Manganese is one of the only three toxic trace minerals in the human body, which means that it should be present in our body only in the required amounts. Be sure to never overdo on manganese supplementation, because it can lead to a wide array of very dangerous conditions and diseases, some of which are fatal. Manganese overdose due to welding can lead to similar symptoms to that of Parkinson’s disease, or the disease itself. Also, for those with liver conditions, be careful not to take in too much manganese, since the liver will have trouble getting rid of it, which can lead to psychosis, mental disorders, and tremors/spasms. Finally, if you have anemia, your body tries to absorb as much manganese as possible, which can be dangerous, so monitor your intake closely. [17] [18]

Rate this article
Average rating 3.9 out of 5.0 based on 452 user(s).
Read This Next:
Popular Articles