Rum is a popular liquor distilled from sugar byproducts, such as molasses, honey or sugarcane juice. It has traditionally been produced in the Caribbean and South America, but more and more regions have begun to make their own signature styles as the spirit has gained worldwide popularity. Let’s take a look at the many different types of rum. [1] 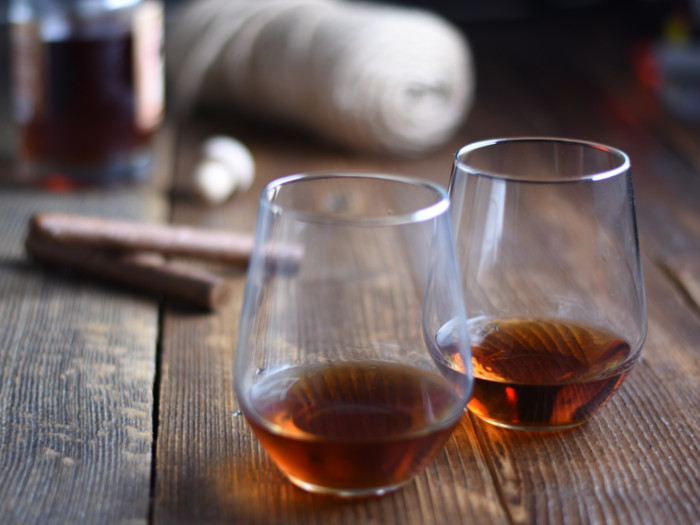 Rum is a sugarcane-based spirit, primarily made in the Caribbean and Latin America. Photo Credit: Shutterstock

Rhum Agricole, also known as cane juice rum, is a type of rum from the French Caribbean that is made with fresh sugar cane juice instead of molasses.

Cachaça is a spirit similar to rum made in Brazil and Portugal. It is also distilled from fermented sugarcane juice. [2]

White or clear rum also referred to as light rum, is a very mild, sweet rum with little flavor. It is most commonly made in Puerto Rico and is extremely popular for mixing cocktails. [3]

Gold or pale rum is an amber-colored rum that has been aged in white oak barrels, imparting its signature color. It is stronger tasting than white rum and can be sipped straight.

Dark rum, or black rum, is made from molasses or caramel and is aged longer than both white and gold rum. It has a much stronger, spiced flavor, and is particularly popular in Jamaica and Haiti for cooking. [4]

Navy rum is a high proof rum named after the British Royal Navy’s old practice of giving their sailors a portion of rum every day. Reinvented by artisanal distillers in the 70s, the Navy standard was notoriously high, and most of these rums hover around 100 proof.

Vintage rum is a limited edition, small-batch type of rum that is valued for its date of creation, much like collectible cognacs or wines.

Overproof rum has a much higher ABV than standard rum, as high as 80%. Bacardi 151 is a popular example of this style. This potent variety is usually only used for cocktails.

Spiced rums are usually gold rums, flavored with a variety of spices, such as cinnamon, clove, anise, and cardamom.

Flavored rum is usually low proof (40% ABV) and is mixed with either fruit juice or flavorings to taste like coconut, banana, mango, or pineapple. They are primarily used to mix cocktails.

Adverse Risks Associated with Alcohol Consumption: It is advisable to drink alcohol in moderation. Alcohol consumption, if done in an excessive manner, can lead to short-term health risks such as violence and injuries as well as long-term health risks such as addiction, alcohol abuse, and chronic diseases. According to the Centers for Disease Control and Prevention, people who should not drink alcohol include women who are pregnant, individuals younger than 21 years of age, and people who are recovering from alcoholism or cannot control the amount they drink. Also, it should be avoided by people who are planning to drive or any other activity that required focus, alertness, and skill. [5]

Rate this article
Average rating 3.7 out of 5.0 based on 5 user(s).
Read This Next:
Popular Articles