What do you use in a recipe that calls for coriander? The fresh leaves or the seeds? Most of you may think of it as a knotty question but the answer is actually very simple. And, for those who are guessing that there is no difference between coriander and cilantro, you will be surprised to know that there is. Take a look at it in this article.

Coriander Vs Cilantro: What’s the difference?

Both coriander and cilantro come from the same plant, Coriandrum sativum. It consists of the leaves, stalks, and seeds. Most people in the United States refer to fresh leaves and stalks as cilantro or Chinese parsley and the seeds as coriander. But the story does not end here. Cilantro is actually a Spanish word for coriander. And interestingly, many European countries like the United Kingdom, know the fresh leaves and stalks as coriander and the seeds as coriander seeds. Since this tends to bring us back to square one, let us stick to cilantro for leaves and coriander for seeds and take a look at the other differentiating factors. 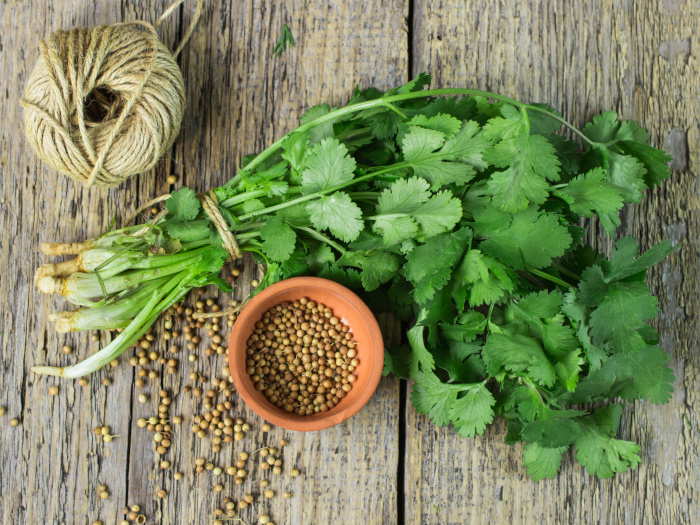 Cilantro has a citrusy flavor and fragrance. It tastes like refreshing herbs to some but people who hate it say that cilantro tastes like soap. [1]

Coriander, on the other hand, has a warm, spicy, and nutty flavor. It is combined with other spices like cumin in many recipes.

Cooking with these two is easy when you know that cilantro is used as an herb and coriander is used as a spice.

Cilantro makes for a great garnish in Mexican, Chinese, Indian, and Thai dishes. Use it in any dish that calls for an herby flavor. You can also add it to your green juices and smoothies. If you like having Indian sauces, cilantro is the perfect ingredient as it is used to make chutney. You can use it in the following recipes:

Coriander has a spicy kick. So, add it to your preparations like soups, kebabs, meat, and curries. You can add it in a powdered form in doughs and batters. The whole or the cracked form can be used for meat rubs and sauces like gremolata. If you don’t know where to start, you can use coriander in the following recipes:

While both of these belong to the same parent, you cannot use any of these as an alternative for the other.

Contrary to this, 100 g of coriander is made up of only 8.9 g water. It does not rank high in vitamin content but it is comparatively rich in minerals like calcium, iron, magnesium, phosphorus, and potassium. It is also rich in protein and fiber. [3]

You can buy cilantro from the farmers market near your house. Choose fresh, green, and crisp leaves over yellow and droopy ones.

Coriander is easily available in local stores and supermarkets in the spice section. If possible, select the whole seeds instead of the powdered form. The powder seems to lose its flavor quickie. So it is best to buy the seeds and grind them whenever you need the spice.

A tip from the author: The leaves and stalks of this plant are also known as coriander in some parts of the world. So do make it a thumb rule to check the coriander-related ingredients in a recipe thoroughly before you start cooking.

Jinal, an ex-banker who has completed her MBA in finance from Mumbai University, is passionate about health and wellness. She is a social media enthusiast. She has completed an online program on “Introduction to Food and Health” from Stanford University, US. On weekends you can find her in cafes or movie theaters. Positivity drives her and she finds peace in cooking, reading, and coffee!
Rate this article
Average rating 0.0 out of 5.0 based on 0 user(s).
Popular Articles