Wakame is an edible seaweed that is commonly used in Japanese cuisine. It has an unusual brown or deep green color because it contains fucoxanthin, a unique compound rarely found in vegetables, which has several medicinal and nutritional qualities. Its scientific name is Undaria pinnatifida and it is considered as one of the most invasive species of seaweed on the planet because it can grow as much as an inch per day in beaches, blocking other marine life. In Japan, it is commonly used in soups, salads, as well as in the form of a side dish. It tastes briny, with a slightly sweet taste. This delicious seaweed is beginning to gain popularity in other parts of the world as well, particularly in France. The impressive list of health benefits has made wakame a staple in raw food, vegan, and macrobiotic diets. [1] [2] 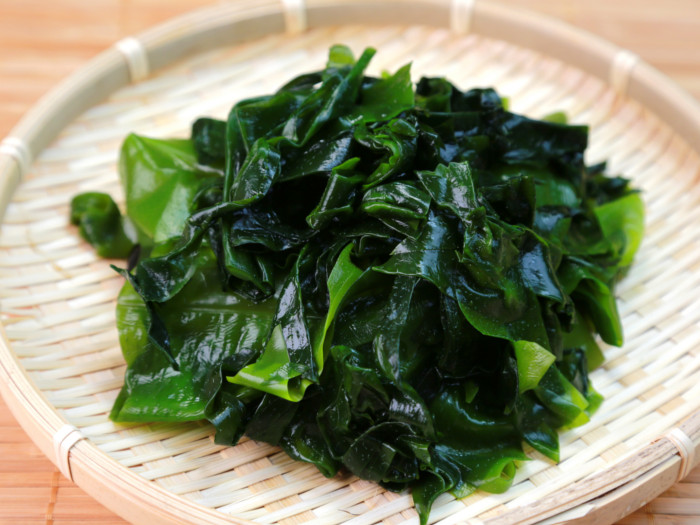 Wakame is a species of edible seaweed, a type of marine algae, and a sea vegetable. Photo Credit: Shutterstock

Wakame is a low-calorie, low-fat food which contains fucoxanthin, a marine carotenoid with anti-inflammatory and anti-proliferative properties.  It is a rich source of carbohydrates and protein. Its major constituent is water along with some amount of fiber and sugar. Most of these health benefits come from the rich supply of vitamins and minerals contained in its delicate green leaves. These include iodine, calcium, iron, phosphorus, potassium, sodium, zinc, and magnesium, as well as vitamin A, vitamin C, vitamin D, vitamin E, vitamin K, vitamin B2 and B9. It is also packed with omega 3 fatty acids and antioxidants like lignans. [4] [5]

The best thing about wakame, besides its taste and versatility, is the enormous amount of health benefits that it offers. Let’s look at them in detail:

The extremely low amount of calories, carbohydrates, and fats in wakame are one reason why it fills you up without adding too many calories to your diet. It is known for its fat-burning properties as the compound, fucoxanthin inhibits the accumulation of fat in the cells and stimulates fat oxidation. [6]

According to a 2014 review article published in [7]Marine Drugs journal, fucoidan present in seaweeds or brown algae such as wakame exhibits anticancer activity against breast and colorectal cancer. Another review article published in 2014 described the antitumor potential of fucoidan and fucoxanthin found in wakame. [8] A 2005 animal study found that wakame helps prevent the proliferation of cancer in DMBA induced rats. It also found that iodine helps induce cell death or apoptosis in the cancerous cell. A 2001 article stated that while iodine may help prevent breast cancer, excess intake should be avoided as that can cause side effects such as thyrotoxicosis. [9] [10] Complete viability of these elements needs to be explored through further clinical studies, suggests a 2015 review published in the Marine Drugs [11] journal. Note: DMBA or 7,12‐dimethylbenz(a)‐anthracene is an immune suppressor and carcinogen widely used in cancer studies.

According to a study, when obese mice were fed wakame, signs of hyperglycemia, hyperinsulinemia, and hyperleptinemia in them disappeared. Fucoxanthin exerts an anti-diabetic effect even on the human body. [12]

Along with its inhibitory effects on fat accumulation, fucoxanthin also stimulates the liver to increase its production of DHA, which is particularly a kind of fatty acid that lowers the levels of LDL (bad) cholesterol in your system. This is the type of cholesterol commonly associated with atherosclerosis and artery blockage, so you are able to protect yourself from various heart diseases, as well as heart attacks and strokes by adding this brittle, salty seaweed to your soups and salads. [13]

The high content of iron in wakame can help increases the production of red blood cells in the body. Iron is an essential part of red blood cells, and higher levels mean increased circulation in your cardiovascular system, which provides additional oxygen to essential parts of the body, boosts energy, enhances the health of your skin, and speeds up the healing process of all the tissues and organs in your body. [14]

Magnesium is an extremely versatile and useful mineral in our body. The high levels in wakame mean that this variety of seaweed can help our body transfer energy efficiently, and help our body produce and utilize protein, which is essential for almost every bodily function related to growth or repair. [15]

Folate, also known as vitamin B9, is extremely vital for pregnant women, as it has been consistently connected with lowered chances of neural tube defects in infants. Wakame contains significant amounts of folate, so pregnant women may add some Japanese dishes to their diet.

Calcium is one of the most important minerals when it comes to protecting the integrity and durability of our bones. The high level of calcium found in wakame helps your body with bone growth and speeds up repair. It also acts as an anti-inflammatory and prevents inflammation of joints, thereby preventing early onset osteoporosis and keeping you fit and active well into your old age. [16] [17]

Iodine is the most important component of the hormonal balance in our body. It is an integral aspect of creating the thyroid hormone, which controls a variety of processes throughout the body, and it is also necessary for the production of energy in the body. Wakame is also a rich source of omega-3 fatty acid, which helps reduce anxiety and fight depression. [18] [19]

The antioxidants present in wakame help to rejuvenate, moisturize, and smoothen the skin. It also contributes to keratin formation and helps in thickening hair and nails.

How To Eat Wakame?

Wakame is usually sold in its dried form and it needs to be hydrated in water for about 10 minutes before it can be used. It expands significantly on rehydration and has to be cut into smaller pieces. In Japan, it is preserved in salt and served fresh. The fresh form may be found in a sealed, refrigerated package in specialty stores. Some popular Wakame recipes include:

Word of Caution: Although the vast majority of the components in wakame are beneficial for your health, it does have a relatively high level of sodium, which isn’t the best choice for people already suffering from obesity or blood pressure problems. Sodium works against potassium to lower blood pressure, so be careful not to over-consume this seaweed in your meals. Other than that, enjoy this delicious Japanese delicacy! [20]

Rate this article
Average rating 3.9 out of 5.0 based on 95 user(s).
Read This Next:
Popular Articles