Garlic (Allium sativum) is a strong-smelling, pungent-tasting herb noted for its many health benefits. It contains a powerful compound called allicin that helps lower cholesterol. The health benefits of garlic include easing the symptoms of common cold, lowering blood pressure, and reducing the risk of heart ailments as well as neurodegenerative disorders.

Garlic is a close relative of the onion and is native to Central Asia. The garlic bulb contains several cloves and each clove is covered with a soft translucent peel. Garlic has been used as a seasoning in food as well as a traditional remedy for over 3,000 years. Sir Louis Pasteur, the scientist who discovered pasteurization, used the anti-bacterial qualities of this herb as early as 1858. A report in the Journal of Pharmaceutical Research suggested that one clove per day may bring a vast improvement in your overall health, while two to three cloves daily could help keep the common cold at bay.

Garlic is very low in calories, saturated fats, and sodium. It has several useful minerals such as phosphorus, potassium, magnesium, zinc, calcium, and iron, and trace minerals like iodine, sulfur, and chlorine. According to the USDA National Nutrient Database, garlic is a rich source of B-vitamins (folate, thiamine, niacin, and B-6), and vitamins C, A, and K. Garlic is one of the rare dietary sources of organic compounds, allicin, allisatin 1, and allisatin 2.

Let’s look at the health benefits of garlic below.

A 2014 paper published in the Cochrane Database of Systematic Reviews cited a study that assessed 146 participants over three months to find out the impact that it had on patients suffering from cold and cough. As part of the study, researchers divided the total number of participants into two equal groups. One group took a placebo tablet while the other group took a garlic tablet. At the end of the study, researchers found that people who took garlic every day for three months instead of a placebo had fewer bouts of cold as compared with the placebo group.

According to a 2014 report in the Integrated Blood Pressure Control journal, aged garlic extract has the ability to lower blood pressure in hypertensive individuals. However, further studies are required to verify if they can be considered an alternative therapy for hypertension.

Raw garlic, rich in the allicin compound, prevents LDL (bad) cholesterol from oxidizing. Research shows a reduction in cholesterol and triglycerides in rats consuming raw garlic. However, there is not enough research to verify this health benefit definitively.

Garlic has significant cardioprotective properties, which might help prevent diseases like atherosclerosis, hyperlipidemia, thrombosis, hypertension, and more. While most reviewed research supports the correlation between garlic intake and cardioprotection, per the Nutrition Journal study, further research is needed to decide proper form and dosage. One should keep a close tab on the proper use of this pungent herb i.e. use of different preparations available, dose, duration and its interaction with generic drugs.

High doses of garlic may prevent organ damage caused by heavy metals. The sulfur compounds in this herb drastically reduce lead levels in the blood. They also prevent the signs of toxicity, such as headaches and blood pressure, and also aid in better absorption of iron and zinc in the blood. A 2012 report published in Basic and Clinical Pharmacology and Toxicology reveals that garlic is effective in reducing blood and tissue lead concentrations among human beings and animals alike.

It acts as an effective herbal remedy for the infected wound. Place 2 crushed cloves on the infected area to get instant relief.

Herbs like garlic and onion may impact estrogen levels in menopausal women, reducing the risk of osteoarthritis. They may also minimize bone loss and improve overall bone health in both, men and women.

Daily inclusion of raw garlic cloves in your diet aids digestive problems. Even inflammation or irritation of the gastric canal may be reduced using this herb. Garlic helps clear up most intestinal problems like dysentery, diarrhea, and colitis. Its role in dispelling worms is phenomenal. It does not affect the good bacteria in the intestine but destroys the harmful ones. It not only enhances digestion but also helps relieve stomach gas.

Eating raw garlic cloves reduced blood sugar levels, according to a study published in the Journal of Nutrition.

Garlic has phytonutrients that help reduce oxidative stress, strengthening your immunity. The herb also reduces fatigue and boosts energy. A 2012 report in the African Journal of Traditional, Complementary and Alternative Medicines revealed a study was conducted on rats to ascertain if garlic plays a contributory role in enhancing immune function. After garlic (Allium sativum) extracts were administered to rats at different concentrations, researchers discovered that the extracts, especially at higher concentrations, significantly increased white blood cell counts and showed more immune-stimulating effects.

It is rich in nutrients like selenium, quercetin, and vitamin C, all of which contribute to eye health and help with eye infections and inflammation.

Garlic, along with other ingredients like honey, cream, and turmeric, is used as a home remedy for acne scars and even preventing the onset of acne. This herb is an effective skin cleanser and an antibiotic substance that helps resolve several skin conditions, including skin rashes, psoriasis, cold sores, and blisters. Additionally, it also helps in cell synthesis, protecting against UV rays, and in delaying aging.

Other benefits of this herb include reducing the symptoms of asthma, increasing libido, and hair loss, among others.

Eating boiled garlic cloves is considered an effective homeopathic remedy to reduce the symptoms of asthma. Another suggested remedy is drinking a glass of milk with three boiled cloves each night before going to sleep. It can bring subsequent relief for patients with asthma. Asthma attacks may be brought under control by having crushed cloves with malt vinegar as well. However, it is advisable to check with an expert before trying these treatments at home.

The herb has certain aphrodisiac and libido-inducing properties, so it can be utilized as an effective rejuvenator for sex. 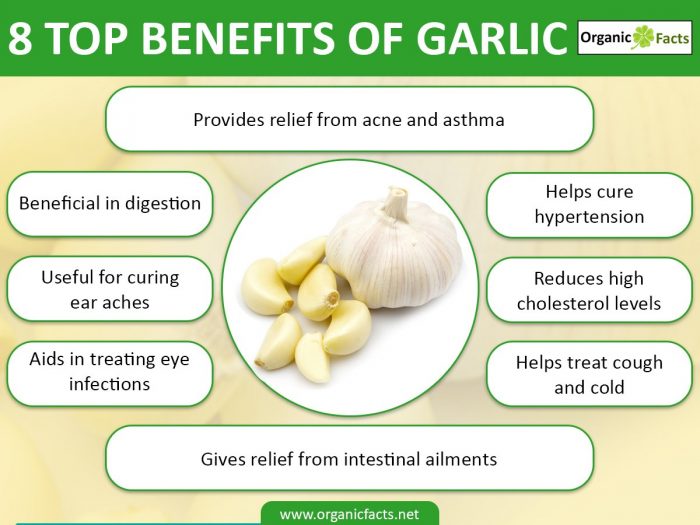 A 2013 report published in the Journal of Neuro-Oncology revealed that garlic contains a compound called diallyl trisulfide (DATS) that is an effective therapeutic agent in preventing tumor progression. More research is needed, given the animal subject population of this study; however, it points that regular intake of garlic may reduce the risk of a variety of cancer. It aids in reducing the production of carcinogenic compounds, and also reduces the occurrence of tumors associated with breast cancer.

For years, garlic has been used as a remedy for weight loss. In animal models, it reduced the expression of genes that are involved in adipogenesis, which leads to the formation of fat cells. The herb increased thermogenesis, which helps burn fat and reduce LDL (bad) cholesterol levels. This research has positive implications for reducing obesity in humans.

Garlic, rich in S-ally-mercapto cysteine (SAMC) and antioxidants, can help prevent fatty liver, according to an animal study. These compounds may also reduce the risk of hepatic injury. Further research is needed to confirm these hepatic benefits.

The herb may help in preventing hair loss and promoting hair growth. Regular application of garlic gel or garlic-infused coconut oil may aid with conditions like alopecia. However, limited information and research on this connection exist, therefore more studies are needed to confirm the scientific association.

The antibacterial compounds present in the herb can eliminate stomach parasites that cause peptic ulcers.

Due to the herb’s antiviral, antifungal, and antibiotic properties, it is commonly used for giving relief from earache and ear infections.

Traditionally, it has been used as a home remedy for dealing with stubborn splinters. Place half a garlic clove over the splinter cut, bandage it, and see the splinter and pain disappear!

How to Use Garlic?

The herb may be consumed raw, but the taste is so potent that most people usually prefer cooking it or adding it to various dishes before eating.

Word of Caution: Excessive intake may irritate the digestive system. Also, garlic can cause bad breath.

The effect of printing health warnings on tobacco products is well known. A recent UK research now shows that it could be just as effective for alcohol and…

Placebo May Affect Some As Effectively As Psychedelics

The debate around the use of psychedelic substances is especially intense with a popular argument in favor of their use to alleviate depression and anxiety.…

Jazz Musicians Show How Creativity Works In The Brain

Neuroscientists have long believed that human creativity is too complex to be confined to one region of the brain. But it was unclear how the brain worked…

How To Boost Your Immune System

There are several ways you can boost your immune system including eating a healthy diet, getting enough hours of sleep, exercising regularly, and minimizing stress levels.

How To Make No-Cream Asparagus Soup

This no-cream asparagus soup uses vegetable parts that are usually discarded, like the woody ends of asparagus and green leak tops. It is topped with buttery asparagus tips.