The practice of ear candling has been a part of traditional cultures for thousands of years, but there remains a great deal of debate over its efficacy.

What is Ear Candling?

Ear candling is the practice of using a heated, hollow candle to cleanse the ear of excess toxins and earwax, in addition to achieving other health benefits. However, while this practice has been widely in use across Asia, Europe, and North America at different times in history, it is still regarded with some suspicion by professionals. That being said, there is strong anecdotal evidence to support the positive effects of this therapy throughout history, and it is considered to be an important cultural, meditative, and curative practice. 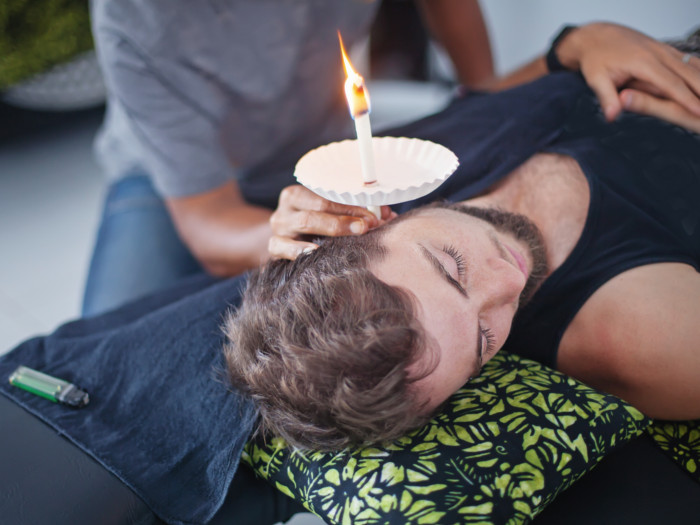 In terms of safety, that is where the majority of the objections take place; since the hollow candle is placed so near to the face, some experts point to potential dangers, rather than possible health benefits. One common solution to this is to slide the hollow candle through a pie tin or paper plate to catch/deflect any falling ash. The point of the process is to allow the smoke to funnel down the hollow tube, heating up the earwax and creating a vacuum to remove any excess material and toxins that should be eliminated.

If you want to try ear candling at home, you will have the best luck if you follow these instructions:

The most impressive benefits of ear candling include removing earwax buildup, lowering your risk of ear infections, and improving hearing, among others.

For those people who suffer an interminable ringing in their ears, the anecdotal evidence argues that ear candling can stop the annoyance by clearing out deeply buried material and blockage in the ear.

Some experience hearing problems, even at a young age, which may be due to blockage in the ear canal, which this unusual therapy can help to solve.

Although earwax is not, in itself, a health threat, it can become painful or uncomfortable if it builds up too far. It can be unsightly, but also provide an ideal breeding ground for bacteria and other unwanted pathogens.

If you regularly suffer from ear infections, ear candling can help to slow the frequency of such painful infections and eliminate space for bacteria to flourish.

For many people, the idea of ear candling is uncomfortable, but there are other ways to access similar health benefits, such as softening the way, moisturizing and boosting omega-3 intake, among others. The hot water of a shower can help break down the earwax, which can then be easily cleared with a swab, albeit carefully! Taking a hot shower can also help to loosen the wax. Although ear candling tends to treat deeper problems, it can also help to moisturize the outer side of the ear. Some studies have also found that increasing your intake of omega-3 fatty acids can cut down on a buildup in the ear, thus making ear candling irrelevant!

Despite the potential benefits, there are some side effects, such as accidental burns from the melting candle. There may also be damage done to the eardrum, which can be difficult to identify at first. In the most extreme cases, when the therapy is utilized inappropriately, it could cause hearing loss.

Is Cow Parsley Safe To Eat

Cow parsley is an edible plant. But, there are some factors that you must be aware of. Learn more about harvesting and foraging for the plant and why you should be careful.